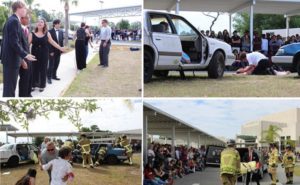 “According to the Centers for Disease Control and Prevention, 2333 teenagers between the ages of 16 and 19 were killed in motor vehicle crashes in the United States in the year 2015,” said SCFR Fire Marshal Richard Tonks. “Our youth need to understand the dangers that come along with reckless driving. The risk of car crashes is higher among 16-to-19 year-olds than among any other age group. They shouldn’t underestimate dangerous situations. We see this scenario play out in real life, and it’s a horrible scene that no one should be a part of. That’s why it’s important for us to reach out to our high school students and alert them of the dangers.”


Hundreds of students witnessed the true-to-life consequences of making a wrong decision. The mock exercise covered the hazards of texting and driving as well as drunk driving. The drama club students played the victims, which included two students who played the role of deceased victims and one student who played the role of the driver who underwent a driving-under-the-influence sobriety test, failed it and was arrested. Other drama-club students compellingly played the parts of the severely injured. The high school students witnessed the mock car-crash scene that featured a Jaws of Life demonstration, the sobriety test, the two victims who left the scene in ambulances and the victim who left the scene in a hearse. It was a sobering mock scene that included volunteer parents arriving at the scene and drama-club students who played the parts of students leaving the prom to arrive at the crash scene to find their friends in the horrific circumstances. It was an eye-opener for all the students. Some were aware of the dangers, but seeing the mock scenario first-hand increased their level of awareness and their future actions.

“I remind our students how much their parents care about them and I tell them how much we care about them,” said St. Cloud High School Principal Nate Fancher. “More than anything else, we want them to be safe. I know the opportunities to make bad choices are out there, but we need them to stop and think about what they’re about to do in these situations. Every decision they make will have a consequence. If it’s a bad decision, it will result in a bad consequence that will tremendously affect them, those close to them and all involved.”

“While teens may not be able to recognize hazardous situations quickly, driving safely and being aware at all times will help them make a critical decision quicker to avoid a serious crash,” said Tonks. “If a person is driving 55 miles per hour and takes their eyes off the road for just five seconds, they will travel the length of a football field… Imagine what can happen at that distance. It’s just a situation that is unimaginable to most people. It’s just not worth it. Making the decisions to wait until you arrive at your destination to check text messages and to not drink and drive will help keep everyone safer. No one is invincible!”

SCPD Officer J. Colley added, “Twenty-eight people die daily in traffic crashes in the United States. If a driver is speeding, drinking and driving or texting and driving and it results in a scene like this mock scenario, it will tear a family apart. I truly hope none of you ever go through something like this. It is absolutely a life-changing experience. And, it’s just so easy for a driver to get home safely nowadays. If they drink, they can call a taxi or a friend, use Uber, call Triple-A’s Tow To Go… It’s just not worth putting yourselves or anyone else in danger.”

SCFR personnel coordinated this first-time event and plan to conduct the real-life scenario again next year to help high school students realize the possible consequences of a driver’s poor decision.

Cappies Review: South Lake High School’s Once Upon A Mattress