This past January, Homeless Services Network of Central Florida, along with the most expansive participating number of organizations and volunteers to date, conducted Central Florida’s annual Point-in-Time (PIT) Count. The PIT Count, an actual physical count of homeless individuals, serves as an annual gauge to capture the number of persons or families in a community who meet the federal definition of homeless, as defined by the U.S. Department of Housing and Urban Development (HUD). While the physical count takes place on the same day every year in January, months of work follow prior to the official release of information which is reported to federal partners.


Volunteers and organizations that participated expanded their reach to make this possible to capture the number of persons living on the streets, in the woods, in shelter and other locations in which individuals who are homeless seek refuge. 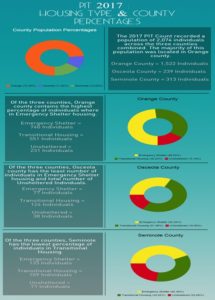 While the Point-in-Time Count is an effective tool in terms of gauge, it is one of many that help community leaders monitor the progress in efforts to combat homelessness, as well as determine the need for appropriate resources.

“Our community has made tremendous strides in understanding the issues faced by those experiencing homelessness,” said Orange County Mayor Teresa Jacobs. “These efforts bring another level of understanding, and this year in particular, boosts our awareness of the current need in Central Florida. As we examine these new numbers, it is critical that we continue to seek innovative permanent supportive and affordable housing solutions for our families, as well as rapid rehousing options.”

With the help of provider partners, a coordinated entry system, now assesses homeless individuals and families to discern those who are the most vulnerable (particularly due to mental illness or physical disabilities), and assists these neighbors into permanent housing.

The region has placed almost 200 chronically homeless individuals and 120 families into permanent housing so far in 2017. These examples of the region’s performance are part of the reason Central Florida scored highest in the state in the most recent application for HUD funding.

“Central Florida has been doing incredible work in changing the homeless services system in ways that other communities want to, but have not been able to,” said Martha Are, Executive Director of Homeless Services Network. “The community has invested in every aspect of the system, from identifying homeless people to placement into housing, and we’re seeing significant changes and improvements. This is an exciting path and Central Florida should be proud.”

“I am proud of our community’s work to house our most vulnerable neighbors and I am encouraged by the system we are building through the efforts of the Homeless Services Network and the Commission,” said Pastor Joel Hunter, chair of the Board of Directors of the Central Florida Commission on Homelessness. “The number of volunteers who came out for this year’s Point-in-Time Count shows our community’s passion for ending homelessness, and their support – as well as the data they helped to collect — will keep our focus where it should be: on helping to transform individual lives through housing.” 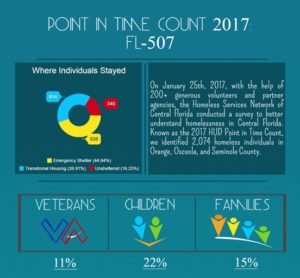 In 2015, the region engaged in a significant cross-jurisdictional effort to develop a better system for locating and connecting with vulnerable individuals who sleep outside or in other places not intended to be a home. Leaders in Orange, Osceola and Seminole counties, and the cities of Orlando, Kissimmee and Sanford committed to increase the number of outreach workers employed through government or not-for-profit providers, and to increase the regional use of the Homeless Management Information System (HMIS), which is used to record homeless status and track program outcomes.

This commitment has generated exciting results in efforts to identify all people experiencing homelessness. Since the beginning of 2016, the number of agency staff entering information into HMIS has increased by roughly one third, resulting in a more thorough and coordinated identification of homeless individuals and families being served across the region.