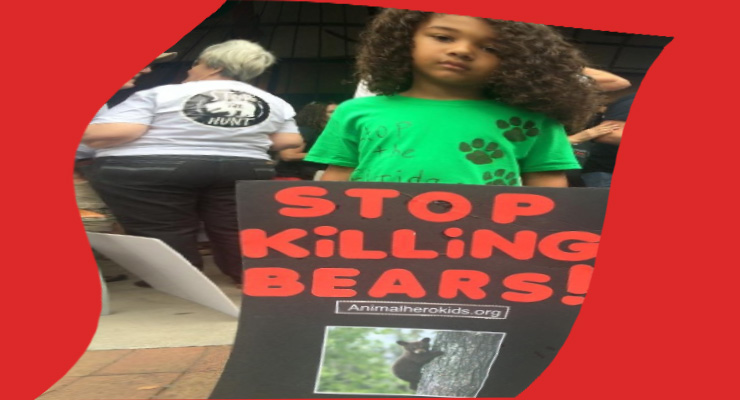 A memorial for slain black bears will be held in Orlando on Sunday, November 1st at Lake Eola. The bear memorial is being sponsored by the Stop the Bear Hunt Coalition and will be led by a five-year-old animal hero named Khendall, pictured to the right.

“I began getting emails, calls from parents and kind kids around the globe asking what they can do to help the bears,” said Susan Hargreaves, founder of Animal Hero Kids, a charity encouraging and recognizing kind kids. “It became evident that a memorial for the slain bears was called for, as well as the need to use the images from the often traumatized monitors.”

Khendall, nicknamed Lil Bear since he was 3, is an Animal Hero Kids Co-President and stated in a YouTube video, “rest in peace black bears, we love you.” Khendall’s video also calls for supporters to upload photos of one of the bears killed in the controversial bear hunt to Instagram using #StopTheFloridaBearHunt. He will open the memorial at 1pm at Lake Eola.

To get involved and see the full post, click here: Bear Memorial Led by Five-Year-Old Animal Hero To Be Held November 1st