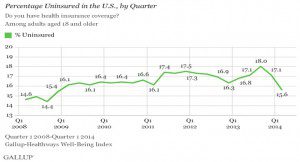 A new Gallup survey reveals that the percentage of Americans without health insurance has fallen from 17.1 percent to 15.6 percent, placing the uninsurance rate at the lowest rate since late 2008. The results comes just days after the Obama administration announced that 7.1 million Americans signed up for private coverage under the Affordable Care Act.

Gallup found that the uninsured rate has been falling since the fourth quarter of 2013, after hitting an all-time high of 18.0% in the third quarter — a sign that the Affordable Care Act, commonly referred to as “Obamacare,” appears to be accomplishing its goal of increasing the percentage of Americans with health insurance coverage. During the first quarter of 2014, uninsured rate fell consistently, from 16.2% in January to 15.6% in February to 15.0% in March. And within March, the rate dropped more than a point, from 15.5% in the first half of the month to 14.5% in the second half — indicating that enrollment through the healthcare exchanges increased as the March 31 deadline approached.

Gallup’s results are based on telephone interviews conducted as part of the Gallup-Healthways Well-Being Index survey Jan. 2-March 31, 2014, with a random sample of 43,562 adults, aged 18 and older, living in all 50 U.S. states and the District of Columbia.