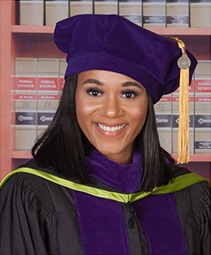 Growing up the eighth sibling in a struggling family of 10 children was a challenge for Jacksonville native Shawndra Nash. But despite the odds, she decided at an early age to study law.

“I wanted to be a lawyer to help people,” said Nash. “Regardless of my meager beginnings, as a?child I knew that despite my circumstances, my life would be bigger than this. I knew that I was destined for more.”

Nash’s hard work and determination to succeed is rewarding. She is a proud member of the Florida A&M University College of Law Class of 2020. During her three years of law school, there were numerous memorable experiences, but there’s one that stands out high above the rest.

“It was when I was awarded the Rattlers 4 Justice Scholarship,” said Nash. “I was so excited I screamed. I worked so hard in law school and in the community, and I was humbled to know it didn’t go unnoticed. It was humbling to know FAMU believed in me as much as I believed in myself.”


The Rattler for Justice Scholarship provides full tuition for the third year of law school.? Nash is not a first-generation college student, but she is a first–generation law student.

“Law is one of the few professions that encourages and promotes argument as a way to find truth, and?the mental and intellectual challenges associated with formulating a good argument is invigorating to me,” said Nash, who interned at the Federal Courthouse in Orlando.

The road to success continues for Nash. Now it is time to study for the Florida Bar exam, which is offered in July. Then it’s off to Gainesville to the University of Florida Levin School of Law’s Graduate Tax Program.

The University of Florida Levin College of Law Graduate Tax Programs are widely recognized by tax scholars and practitioners nationwide as leading programs for the advanced study of tax law. Nash is seeking the LL.M in Taxation.

“I come from very little, and yet I’ve been able to do some amazing things with my life – that’s not a testament of me being special,” she said.?“It’s proof that it can be done. The power of hard work and an unwavering belief in yourself can change your life’s trajectory.”?