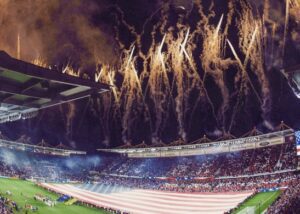 “We are so excited to be able to partner with such an important and impactful organization in the Special Olympics,” Orlando City SC CEO Alex Leitão said. “We are honored that our home, Exploria Stadium, has been chosen to host the 2022 USA Games Opening Ceremony and bring the start of these games, not only to the City of Orlando, but to those participating and those watching all around the world. We can think of no better place to kick off an event that will showcase some of the best athletes in the United States. Our organizations have been working together for a while, building toward today’s announcement, and I’m confident our work leading into next year will make 2022 the biggest and best Opening Ceremony to date.”


During a virtual event, USA Games CEO and President Joe Dzaluk outlined additional big news around Florida’s largest-ever humanitarian event. The City Beautiful will welcome 5,500 athletes, coaches and officials from across the United States and, for the first time, 15 additional countries from North America and South America, as well as 125,000 family and friends, and 10,000 volunteers for the 2022 USA Games.

“We’ve always said that this will be big, and now with amazing support from Ambassadors and partners, we’re able to start celebrating how big this will be,” Dzaluk said. “We are 18-months away from the Games, and now more than ever, we’re looking forward to putting the spotlight on our amazing athletes, spreading the message of inclusion and inspiring a new generation of Special Olympics supporters.”

In addition to the venue announcement, new celebrity Ambassadors were introduced, including Orlando City legend and former captain, Kaká, who will join current Orlando Pride and U.S. Women’s National Team defender Ali Krieger as an Ambassador for the 2022 USA Games. The other new Ambassadors include Matthew McConaughey, Tyra Banks, Annika Sörenstam (full list).

Buddy Dyer’s Bike to (his) Work