According to law enforcement reports, PCSO deputies and Polk Fire Rescue personnel responded to William G. Roe Park (2403 7th Street, SW) in Winter Haven and found the 52-year-old man unresponsive on November 6, 2022. The victim was transported to a local Central Florida hospital and treated for a drug overdose. The drugs found on the man tested positive for fentanyl.

Police said that on November 24th, just a few weeks after the victim was released from the hospital, he died in Volusia County as a result of another suspected drug overdose. His death is still under investigation in Volusia County. 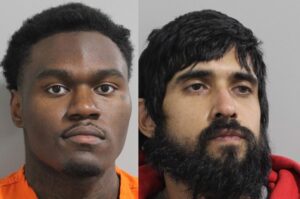 Through investigative means, PCSO detectives learned the victim purchased fentanyl from a man known as “BJ.” “BJ” was identified as Brandon Jones. A second suspect was also identified as Joeffren Padilla III.

Over the course of the two-month investigation, Polk Sheriff’s undercover detectives negotiated multiple illegal drug purchases. Detectives then served a warrant at Jones’ residence in Winter Haven and in total seized:

According to police, the amount of fentanyl seized is enough to kill about 70,000 people.
During one negotiated purchase, Padilla and Jones met the detective at the agreed upon location. Jones then handed Padilla a clear bag of almost 58 grams of fentanyl to give to the detective.

On another occasion, Jones warned the detective to not “take too much of it (methamphetamine) because it’s really strong.”

“It’s no secret drug dealers are killing people in our community,” said Sheriff Grady Judd. “Through this investigation we learned that Brandon Jones sold illegal drugs to a man who overdosed in Polk County, and then later, he overdosed again in Volusia County where he died. This investigation is ongoing, but let me make it clear, we will bring homicide charges against drug dealers when we find out they have sold drugs to people who in turn are killed from those drugs. We will hold these killers accountable.”

Brandon Jones was arrested for:


Law enforcement said his previous criminal history includes 8 felonies and 10 misdemeanors for Battery, Domestic Violence Battery, Burglary, Grand Theft, False Imprisonment, Petit Theft, Possession of Marijuana, Possession of Drug Paraphernalia, and Violation of Probation. Jones is currently in the Polk County Jail and does not have a bond.

Joeffren Padilla III was arrested for:

Law enforcement said his previous criminal history includes 11 felonies and 9 misdemeanors for Burglary, Grand Theft, Domestic Violence Battery, Petit Theft, Possession of Methamphetamine, Possession of Heroin, Possession of Marijuana, Possession of Drug Paraphernalia, and Violation of Probation. Padilla is currently in the Polk County Jail and does not have a bond.

Listen to Sheriff Judd’s comments on the arrests of these two Winter Haven men for fentanyl trafficking.