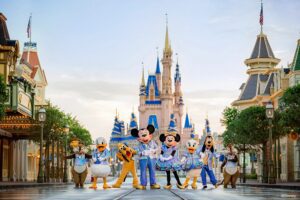 After more than a year of delayed birthdays, anniversaries, graduations, and other  milestone events, Visit Orlando, the official tourism association for the most visited destination in the  U.S., will offer the chance to make up for lost time at The Most Magical Place on Earth. Visit Orlando’s Most Magical Gathering Contest will reunite one winner and up to 49 friends and family with an experience of a lifetime in Orlando and at Walt Disney World Resort. The vacation celebration for up to 50 people includes Walt Disney World theme park tickets, accommodations at a Disney Resort hotel for  a three-night, four-day stay, and two private catered group celebrations from Disney Meetings & Events at Walt Disney World Resort, planned by a Disney event specialist. The package also includes  roundtrip airfare to Orlando provided by Spirit Airlines, and airport transportation to and from Walt  Disney World Resort.


“We are thrilled to announce this incredible contest to allow families to reconnect in such an amazing way at Walt Disney World Resort during its 50th anniversary celebration,” said Casandra Matej,  president and CEO of Visit Orlando. “There is no better place than Orlando for families, including  grandparents, extended family members and friends, to gather together for a once-in-a-lifetime  opportunity to create unforgettable new memories.”

“Being together with family and friends is valued today like never before,” said Maryann Smith, vice  president of sales, services and events at Disney Destinations. “After so many people have missed so  many milestones and special events, our Disney team can’t wait to host the contest winners and other  groups for unforgettable experiences that can only happen at Walt Disney World Resort – especially  during The World’s Most Magical Celebration commemorating our 50th anniversary.”

Entries must be submitted on VisitOrlando.com/50 and include a group photo and 250-word story that  answers the question “Why do you and your family need a Magical Gathering” at Disney for 50 people. The top 10 finalists will  be invited to submit a two-minute video that showcases via video why their family deserves a Magical  Gathering in Orlando and should win the grand prize trip.

Visit Orlando’s Most Magical Gathering Contest runs until November 29, 2021. The grand prize  winner will be announced in January 2022. The winner and their guests must be able to travel March 4th-7th, 2022. Outside of the private celebration events, meals are not included. Transportation to other Orlando locations is also not included.

Flights for the Visit Orlando’s Most Magical Gathering winner and their guests will be provided by Spirit  Airlines. Spirit is the second-largest carrier at Orlando International Airport and its largest international  operator. The airline’s fleet of Airbus aircraft is among the youngest in the U.S. For contest rules, restrictions and more information, go to VisitOrlando.com/50.