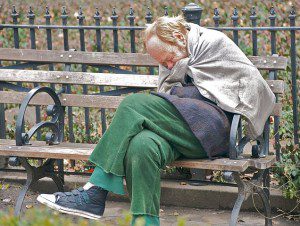 I certainly think it noteworthy that the Orlando Magic are continuing their erstwhile tradition of serving meals at Thanksgiving to the Coalition for the Homeless. Might we ask that they consider extending their leadership to not just giving them a fish, but lead in helping them to build a pond?

The recent ‘Impact on Homelessness’ breakfast revealed that Orlando is number 2 in the nation in homelessness for cities its size. I was impressed with the program especially when a city hall employee masqueraded as the homeless person she used to be. She asked that we all offer the helping hands that were offered to her that led to her self-sufficiency and independence.

The National Directors noted that the solution begins with “Housing First.” I have witnessed the Mayor, Commissioners, Faith based institutions, businesses, law enforcement and social organizations come together and resolve any issue that they prioritize. Any proposal or initiative that they want – THEY DO. They find a way, they find the money.

After viewing the beautiful new art downtown at Lake Eola, I had occasion to walk from Magnolia to Orange Avenue along Robinson Street. I was brought to tears at the 15 to 18 or more people who lined the building that houses FED EX. They were sleeping in the doorways, bundled together, huddled against the chill of the night. Their shopping carts and all their belongings carted with them. I emptied my pockets and gave them all the money I had on me. I believe sometimes, there is a greater value in giving directly than to an organized institution. Bishop Wiggins and Steve Hogan have demonstrated this and warned against toxic charity.

As was pointed out at the Impact breakfast, remove the restrictions, barriers, filters and intake rejections. Give to them, minister to them, help them. It does not matter that they may be ex- this or that. They need permanent hope and help. Some say: “Oh they will just go and buy liquor or drugs.”  Verily, I say unto thee, if you were in their situation of hopelessness and helplessness – you might self medicate to try to cope too.

Beautiful St James Church stands pristine across the street. The contrast of the City, ever so beautiful against the destitute not so beautiful, is a stark contrast.

Dr Phillips Charities owns many empty properties in industrial areas. So do many other landholders. If it was the will of The Partnership to eliminate this eyesore and human tragedy in collaboration with the WILL of the city leadership – it would be done, not after the research report due in February but NOW. Done as a gift to the least of us as an example of WHAT JESUS DID, not just what he would do in celebration of his light and love for Christmas.

I have been castigated, vilified, ostracized, jailed, attacked, isolated and contracts put on my life for speaking out here in Orlando against oversights and neglect of the voiceless. I guess, I will never learn to just shut up , stay out of trouble and go along to get along, when I believe in my heart that THIS IS WHAT THE CHRIST WOULD DO. HOUSING FIRST!

Jonathan Sebastian Blount is an Advocate for The Fifth Estate. He can be reached at 202-997-7574 or jonathanpsc@yahoo.com