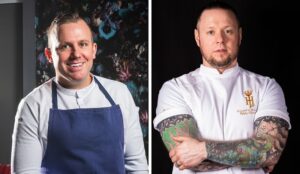 Immersion at London House by Chef Rikku, launched to the public in April, welcomes Washington DC’s two Michelin-starred Jônt for a one-night-only collaborative dinner on Wednesday, June 8th. Through the lens of sustainability, chefs Rikku O’Donnchu (Immersion) and Ryan Ratino (Jônt) come together in a collaborative 15-course, open-to-the-public, dinner.

This collaborative dinner costs $895 per person including beverage pairings.


Guests can expect an experiential meal that taps sustainable ingredients and culinary methods to surprise and delight. The collaborative meal features dishes including Mushrooms and Where to Find Them, featuring foraged mushrooms and house-made ricotta-filled choux, black miso custard, and mushroom tart alongside the Golden Egg with ethical foie gras and lots of cherry from Immersion. The Jônt team will be serving Bluefin Tuna from Ehime served with buttermilk and sake kasu and Wild Sika Deer, sustainably harvested from Texas.

“By using a mix of rare and highly sustainable ingredients, we’ve created dishes that challenge guests’ perception of what food can be, all while creating delicious and artistic plates,” explains Immersion’s Executive Chef Rikku Ó’Donnchü.

“My team and I are thrilled to be collaborating with Chef Rikku,” said Chef Ryan Ratino, owner of Jônt. “These collaborations are very special because we are not only creating unique experiences for guests but we are learning new skills and techniques from each other. Without a doubt these dinners are a win-win for everyone.”

Jônt has held pop-ups across Florida, but this marks the first collaborative dinner in Orlando. Further, it’s a homecoming for Chef Ryan Ratino, who is a graduate of ??Le Cordon Bleu in Orlando and launched his culinary career at Shula’s Steak House at the Four-Diamond AAA award-winning Walt Disney World Swan and Dolphin resort prior to landing at Bluezoo where he worked under Todd English.

Seating is limited given the intimate, boutique experience at Immersion. Reservations were no longer available on OpenTable despite the price tag. London House, which recently announced it is opening to the public with two distinct dining experiences, inclusive of Immersion, is located at 8000 Dellagio Way in Orlando, Florida.