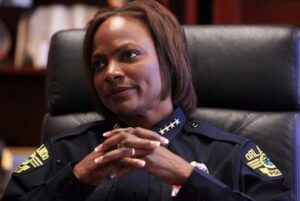 U.S. Representative Val Demings issued a statement honoring National Police Week 2021. This week, 701 new names will be added to the National Law Enforcement Officers Memorial, including 434 who died in 2019 and 2020.

“Serving as a 27-year police officer and police chief was one of the great honors of my life,” said Rep. Demings. “During this week, we recognize the men and women in blue who gave their lives in service to their communities. From Miami to Jacksonville, Palm Beach to Pensacola, they gave their lives in a righteous cause: to build a safe community for every Floridian. They were men and women of honor, devotion, and courage. They were mothers, fathers, sons, daughters, brothers and sisters. We should thank them every day, but this week in particular I hope that every American will join me in prayer and thanks for all that our law enforcement officers do to keep us safe.”


Rep. Demings is a former 27-year police officer and Chief of the Orlando Police Department. She is also currently running for U.S. Senate against Republican Senator Marco Rubio.

Late last month, Rep. Demings made comments on end of negotiations on the George Floyd Justice in Policing Act in Congress. “America’s communities and America’s dedicated police officers both deserve clear rules and frameworks that will keep everyone safe,” Rep. Demings said. “What happened to Mr. Floyd was brutal, senseless, and murder. Whether a police officer or citizen, we should never want what happened to him to happen to anyone again. We should acknowledge the service of good police officers, but we must hold bad ones accountable. Obstruction of reasonable legislation leaves everyone less safe. I remain committed to working on legislation that will make officers and members of our community safer.”

She was an original cosponsor of the Justice in Policing Act.