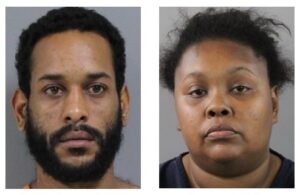 Deputies, who were supported by K-9 and Drone units, responded to a residence in Lakeland and quickly arrested the suspects, 30-year old Jonathan Rivera and his girlfriend 28-year old N’zinger Williams. Both suspects were taken to the PCSO Sheriff’s Processing Center to be booked-in and will await extradition to the Virgin Islands.


“The suspects are wanted for the murder of a 28-year old St. Croix man in June of this year,” said Sheriff Grady Judd. “They are both from the Virgin Islands and came here in late June apparently thinking Polk County would be a good place to flee to. They were obviously wrong.”