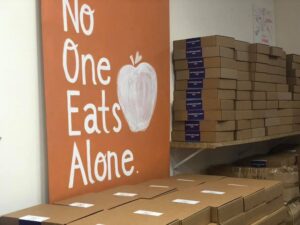 A bullying prevention initiative designed to promote inclusion among students was celebrated at three Florida schools with the help of Sunshine Health. The schools included Skyway Elementary and Twin Lakes Elementary in Miami, and J.E.B. Stuart Middle in Jacksonville.

Representatives from Sunshine Health hosted an assembly at each school in honor of National No One Eats Alone® Day, created by the non-profit Beyond Differences™. More than 750 students participated in activities designed to teach them about social isolation and the negative impact it can have on a student’s health and academic performance. The students engaged in a simple act of kindness at lunch – making sure no one is eating alone by sitting with students they didn’t know. They were given icebreaker topics to spur conversations and highlight their commonalities.


Social isolation affects millions of students and has been identified as a precursor to bullying, self-harm and community violence. Students have shown that if they are given the tools, they will stand up for others as empathetic and caring activists, not passive bystanders.

“We recognize the negative impacts bullying and social isolation can have on a child’s overall health,” said Chris Coffey, CEO of Sunshine Health. “We are proud to partner with Beyond Differences to celebrate No One Eats Alone Day and raise awareness about social issues impacting the health of our children.”

“Social isolation is a preventable public health problem,” said Laura Talmus, co-founder and executive director of Beyond Differences. “We’ve learned through teachers and families that No One Eats Alone Day is a powerful step and positive initiative that can change the culture in schools to be a more welcoming place for all.”