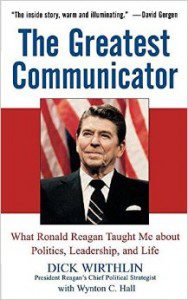 Ronald Reagan has become one of the Republican party’s legendary figures through the years.  His campaigns of 1980 and 1984 are both memorable for many reasons.  “The Greatest Communicator” depicts a multi level man and president by someone who worked with him for so many years.  Wirthlin goes behind the scenes of the two campaigns, Oval office meetings, his long relationship with Ronald Reagan from governor of California to after his presidency are just a few of the things he covers.  Wirthlin was a witness to the primary where Regan announced he had paid for the microphone, the lead up to his memorable remark to Walter Mondale in their debate, the day the president was shot and how he handled the situation, and the sense of humor Regan had throughout his life. The book is  touching when Wirthlin met with Reagan different times during the presidents’ last years where he had Alzheimer’s. Wirthlin also reveals things he learned from Ronald Reagan and how he was affected when Reagan passed away. The insight Wirthlin gives as a person who worked with Ronald Reagan as well as a personal friend for so many years makes “The Greatest Communicator” so much more interesting to read.

At conventions like Oasis, and Spooky Horror Empire, the question at panel discussions is asked  “How do you break into the business of writing?”  Christopher Sirmons Haviland has answered it and more with his collection “The Synopsis Treasury.”  For over ten years Haviland collected the letters between editors and writers about their works and now presents them here for the first time in this anthology.  Among the names are Robert Heinlein, H. G. Wells, Andre Norton, Joe Haldeman, Jack Williamson, Ben Bova, Frank Herbert, Kevin Anderson, Connie Willis, Terry Brooks, Piers Anthony, and Michael Bishop are some of the writers included in this collection.  Some of the writers have been editors themselves like Ben Bova, Jack Williamson and Kevin Anderson but it is the letters between the writers and the editors that make the collection so interesting to read.  Two of them are Frank Herbert and Damon Knight about works by Herbert that include “Dune,” or Robert Heinlein and Fred Pohl who also became an sf writer, on Heinlein’s many short stories and novels.  With all of the correspondences you see the friendships between author and editor that developed over the years as well how different works took shape.  “The Synopsis Treasury” is a groundbreaking collection that any fan of science fiction or any budding writer can not afford to miss.

Lights. Camera. Lupus. A Life of Entertainment Through the Purple Lens 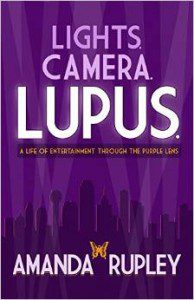 Amanda Rupley has been involved in the entertainment business in many different aspects.  Her book “Lights. Camera. Lupus.” shows some of the things she has been a part of through the years, but it is also the story of a woman who learns she has the disease Lupus.  There are over 100 autoimmune diseases and Lupus is one of them. Rupley tells how she found out she had the disease and the ways she has learned to deal with it.  For some time she had no answers until she was lucky to find a doctor who was familiar with the symptoms of Lupus that Rupley was showing.  From then on things changed as she learned as much as she could about Lupus on the internet and organizations that deal with the disease.  Unlike other sufferers who have written books about the disease she does not describe it as a wolf waiting to attack its prey, she just treats it for much of the book as if it is something she can beat. She does though have a support group of her husband and family as well as her faith in God that has helped her along.  “Lights. Camera. Lupus.” ends on a more positive note.   Even though you have something that could be classified as a negative you can still do anything you want to if you just have to have the mindset to do it. 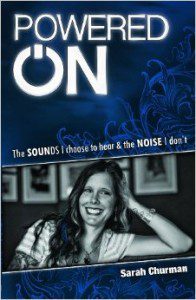 From birth to age 29 Sarah Churman was legally deaf.  Then she learned of a new process of medical technology that enables people to hear.  Many may remember when her implants were turned on because the media was there to witness the event.  She tells her remarkable story in “Powered On The Sounds I Choose to Hear & the Noise I Don’t,” from the obstacles she had to overcome to her discovery that there was hope that she would one day hear. She shows how cruel other children can be, bullying she had to endure, how she became skilled at reading lips and sign language, how unkind other adults could be and the challenges she faced fitting into society with a handicap. Through faith in God, her husband and his family, she was able to persevere and overcome her deficiency.  She became a media sensation and talks about the many shows she has been on to tell her story, as well how she hopes her story can help others.  “Powered On The Sounds I Choose To Hear & the Noise I Don’t” is an inspirational narrative that shows that there is light at the end of the tunnel. 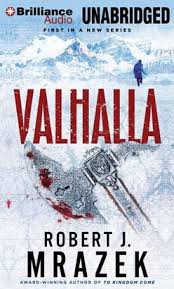 “Valhalla” is the first of a series that roars off the page from the very beginning.  An expedition team in Greenlandgets more than they bargained for when they discover Viking crewmen five hundred feet below the World War II plane they originally found.  Now several world governments as well as international business men are trying to stop the team from revealing their find.  There is plenty of action for any fan of techno thrillers as well as action adventure by a master of the genre.  “Valhalla” would make a great action packed film.