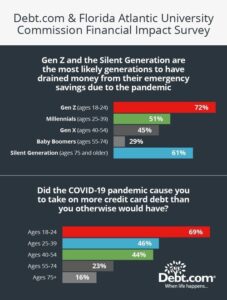 A joint survey conducted by Debt.com and the Florida Atlantic University Business and Economics Polling Initiative shows the oldest and youngest respondents had to drain their savings account due to the pandemic. Gen Z (ages 18-24) did that the most, at 72%, followed by the Silent Generation (75 years old and up) at 61%.

The three generations in between fared better at maintaining their savings during the pandemic, but the statistics are still concerning. Only half of Millennials (51%) tapped their savings, followed by Gen Xers at 45%. By and large, Baby Boomers managed to keep their savings intact, with only 29% of Boomers saying they took out savings.

“The pandemic’s economic shock – and its after-effects – is affecting the oldest and youngest adults in America the most,” says Debt.com Chairman Howard Dvorkin, CPA. “Younger Americans were already falling further behind financially and delaying life goals thanks to things like student loan debt. Now they are even further behind because of COVID. Not only do they have less savings, but large numbers also reported that they lost income and took on credit card debt because of the pandemic.”

Young Americans were also the most likely to stop paying their credit cards at some point during the pandemic. Over half of Gen Z survey respondents (57%) admitted that they couldn’t keep up with those bills. Compare that to just 17% of Baby Boomers and 21% of Gen Xers who said the same.

FAU BEPI director Monica Escaleras noted that differences arose not only by age, but also by location. “The younger generations and those in Northeast and West took on more credit card debt,” Escaleras says. “Individuals in the Northeast and West also reported a higher percentage of income loss due to COVID-19 compared to the South and Midwest.”

“Just as COVID-19 has spread unevenly across the country, the financial devastation is also uneven,” Dvorkin says. “Overall statistics about the price we’ve paid tell us something, but they don’t tell the full story.”

FAU Poll: Floridians Cutting Back in Reaction to Rising Inflation