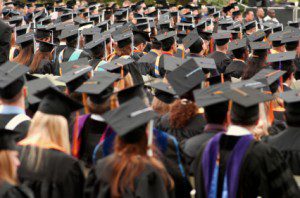 The college graduating class of 2013 will enter a stronger job market than in the years immediately following the recession; however, young professionals entering high-skill fields may have a decided advantage, according to a new study from CareerBuilder.com and CareerRookie.com. More than half (53 percent) of U.S. employers plan to hire recent college graduates in 2013, on par with 2012 (54 percent) and up significantly from 46 percent in 2011 and 44 percent in 2010.

The nationwide survey—conducted online by Harris Interactive© from February 11 to March 6, 2013— included more than 2,000 hiring managers and human resource professionals across industries and company sizes.

Employers in industries that generally demand more high-skill workers are also more likely to recruit recent college graduates. According to the survey, information technology employers rank ahead of all industries with 65 percent of hiring managers and human resources professionals planning to hire recent graduates. They are followed by financial services employers (63 percent) and health care employers (56 percent). Additionally, the survey found that employers in IT and financial services are the most likely to recruit workers for hard-to-fill jobs (37 percent, each) prior to graduation.

“New college graduates are facing a better employment situation this year, but the number of employers planning to recruit them are still trailing pre-recession estimates by more than 20 percentage points,” said Brent Rasmussen, president of CareerBuilder North America. “The market remains highly competitive. Those graduating with niche or technical skill sets will be in a better position to find more opportunities in higher-paying jobs.”