Still No Arrest in Armed Carjacking at Orlando International Airport

Nearly two weeks after an armed carjacking at Orlando International Airport, the suspect, who is believed to be a white male in his mid 20’s, average build, clean shaven with dirty blond or brown hair, is still on the run as local police have not made an arrest.


The Orlando Police Department confirmed to West Orlando News this week that the “investigation is still ongoing.” 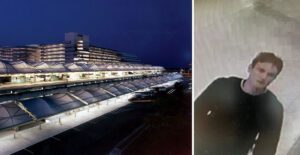 On Monday, January 9th at approximately 12:10am, airport units responded to Frontier Airlines curbside in reference to an armed carjacking. The unknown male approached the victim’s vehicle, armed with a gun, and the victim exited as the suspect entered the vehicle.

But there was approximately a 10–20-minute time lapse before law enforcement was notified. According to police, “be on the look out” notifications were immediately put out to surrounding agencies, OPD Crime Center assisted, and local area checks were conducted. These were all met with negative results, OPD reported.

The armed carjacker at Orlando International Airport was wearing a black crew neck sweatshirt, dark pants, dark shoes and was carrying a black backpack the day of the crime, according to local police. The Orlando Police Department is requesting the public’s assistance in helping to identify the pictured suspect.

Please contact the Orlando Police Department at 321-235-5300 or report a anonymous tip to Crimeline at 1-800-423-TIPS if you know the identity of this individual.

Public safety is the top priority of the Orlando Police Department, as crime persists around the city under Mayor Buddy Dyer. OPD emphasized that pledge includes the safety of those who travel in and out of the Orlando International Airport. The Orlando Police Department is contracted by the Greater Orlando Aviation Authority to assist in providing security at the airport and will continue to work with them and our federal and security partners to ensure the safety of all who travel through Orlando.

It is hard to believe that an armed carjacking took place at Orlando International Airport, and harder to believe there has still be no arrest made. Both local residents and tourists traveling to Disney or Universal may think about our airport and public safety differently.