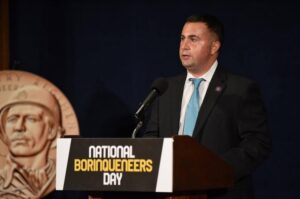 “On the first National Day of the Borinqueneers, we pay tribute to the heroes of the 65th Infantry Regiment who, despite discrimination, fought courageously to defend the freedoms of every American,” said Congressman Soto.“The Borinqueneers never failed to demonstrate the valor of their exemplary heroism, and now, their legacy lives on.”


“Today, Puerto Ricans enlist in the military at double the rate of mainland residents,” continued Congressman Soto. “As we come together to honor their lifetime of service and devotion to the United States, we reaffirm that their sacrifices were not in vain. Let history forever remember them as the patriotic heroes who represented the pride and fighting spirit of all Puerto Ricans. Today and always, we thank each of them for their service.”

“Records show that Puerto Ricans have a long history of service in U.S. conflicts, including the Revolutionary War and the Civil War. With and without citizenship, whether answering the call to mandatory enlistment or doing it so freely and voluntarily, with or without the right to vote for their Commander-in-Chief, Puerto Ricans are known for our sense of responsibility and willingness to fight for the common good. The story of our men of the 65th cannot be buried in history books, it needs to be shared, appreciated and celebrated.” said Congresswoman Gonza?lez-Colo?n.

Last year, the U.S. House of Representatives and Senate approved H.R. 6395, the National Defense Authorization Act (NDAA) for Fiscal Year 2021, which included language designating April 13th as “National Borinqueneers Day” in honor of the 65th Infantry Regiment, a U.S. Army unit that consisted mostly of soldiers from Puerto Rico. The Regiment distinguished itself for bravery during the Korean War and other conflicts, overcame discrimination against Hispanic soldiers and earned the Congressional Gold Medal on April 13, 2016.

A video of Congressman Soto’s remarks can be found here.