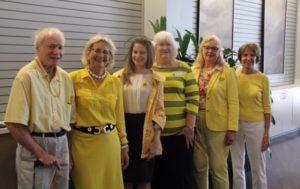 Seminole County residents have banded together to form a solar co-op to make it cheaper and easier for homeowners to install solar panels, which can produce major saving on power bills. Sharon Lynn, League of Women Voters Seminole County Natural Resources Chair announced, “Seminole is the 100th solar coop we’ve launched in the nation, and we are thrilled to have the chance now to educate consumers on the advantages and cost savings solar offers.” The group will host multiple information sessions (see below for more details).

Dr. Joel Hunter, Senior Pastor of Northland Church, where the news conference was held, noted that he had put solar on his home. “My bill last month, was only $10,” he said. “It’s not only the moral thing to do – it’s the sensible thing to do!”


Seminole County Commissioner Lee Constantine, who also has solar installed on his home, noted that “the League is a powerhouse and I support this program’s efforts to spread solar in Seminole and throughout the state. Florida should be a leader in rooftop solar.”

Joining the co-op is not a commitment to purchase solar panels. Once the group is large enough, FL SUN will help the co-op solicit competitive bids from area solar installers.

“If you’ve ever thought about going solar before, this 3-month window is your golden opportunity, said Angela DeMonbreun, FL SUN State Director. “It will save you time and money.”

Co-op members will select a single company to complete all of the installations. They will then have the option to purchase panels individually based on the installer’s group rate. By going solar as a group and choosing a single installer, each participant generally saves up to 20% off the cost of their system.

“Solar is like having a printer on your roof,” said Mike Cohen, who was a member of the first Central Florida FL Sun co-op. “It keeps on printing money.”

The latest move to expand the use of solar power in the Sunshine State builds on less than one year of the program with nine co-ops launched already across the state.

Seminole residents may sign up for the co-op at flsun.org/seminole/

The group will host multiple information sessions to educate the community about solar and the co-op process. The first session is scheduled for: