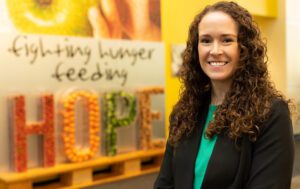 Second Harvest Food Bank of Central Florida has hired Stephanie Marie Palacios, J.D., as its new Director of Advocacy & Government Relations. In this role, Palacios will work alongside elected officials and government agencies to advocate for food access and hunger relief initiatives for Central Florida residents.


With extensive experience in both law and policy, Palacios is ideally suited for her new role. Since 2017, she has served as an advocate managing constituent issues including healthcare, Social Security, small business and labor issues, while working as a liaison with the Department of Justice, the Centers for Medicare and Medicaid Services, and other federal agencies.

“To achieve our mission of ending hunger in Central Florida, collaboration with our community leaders is crucial – and that’s why we’re pleased to welcome Stephanie to this pivotal role,” said Derrick Chubbs, President and CEO. “As Second Harvest’s voice in government, she will raise awareness and support for programs that will offer relief to our neighbors in need.”

Palacios received her bachelor’s degree in Political Science at the University of Central Florida and earned her J.D. at Stetson University College of Law. She was admitted to The Florida Bar in 2013.