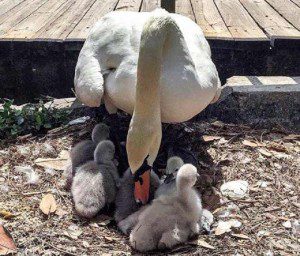 There is outrage spreading across downtown Orlando today as the City announced six Cygnets, or baby swans, from Lake Eola Park were stolen from their nest last night. The baby swans were reportedly only 1 day old and their mother was heard crying near her nest.

“Some scumbag stole six Cygnets (baby swans) from Lake Eola Park last night,” City Commissioner Patty Sheehan posted on Facebook. “I am furious. This is a crime against all of Orlando, and this will be prosecuted to the fullest extent of the law.”

The heartbreaking crime in downtown Orlando really makes you wonder what is wrong with some people.

“It is with sadness that we have to report that these new baby swans appear to have been taken from the park on Monday night to Tuesday morning,” the City of Orlando posted. “If anyone has any information on the disappearance, please contact the OPD Crime Line by calling 1-800-423-TIPS.”