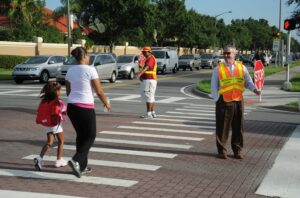 According to Smart Growth America’s “Dangerous by Design” 2021 report, Orlando continues to rank as the worst in the nation for pedestrian safety, a distinction held for a decade. For the last ten years, the deaths of people killed while walking has continuously been on the rise nationally, in spite of overall traffic fatalities barely increasing. The equivalent of 17 people a day were struck and killed by drivers in 2019, however, the risk is not the same in every place or for all people. Black Americans, older adults, people walking in low-income communities, and American Indian or Alaska Native people all die at higher rates and face higher levels of risk compared to all Americans.


Using the most recent federal data on pedestrian fatalities combined with data on population and walking rates, Dangerous by Design 2021 creates a “Pedestrian Danger Index” (PDI) to compare the relative risk to pedestrians among jurisdictions with different rates of walking. The report ranks the 100 largest metro areas to show which are the most deadly, as well as providing rankings for states, and also showing which states/metros are getting worse since the report’s last edition in 2019.

Orlando Mayor Buddy Dyer has been in power throughout this appalling distinction in pedestrian safety. The current approach to making our streets safer for all people should be judged on its merits, and it is a failure. Continuing to blindly hope that this trend will reverse itself without fundamentally changing the approach is to consent to more preventable deaths.

Smart Growth America’s latest Dangerous by Design 2021 report provides the most up-to-date look at how dangerous each state and the largest metro areas are for people walking. The last four years in a row (2016-2019) all reached levels of carnage not seen since 1990, according to the report.

As a state, Florida ranks worst in the nation. That means Orlando is the worst of the worst. Thanks Buddy Dyer.

Of course, Mayor Dyer likes to keep his staff busy making reports to show he is doing something. Even though he has been in power for so long. Well, here is the City of Orlando Vision Zero action plan, with plenty of city staff acknowledgements.