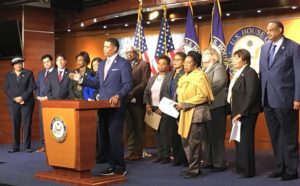 Today, U.S. Representative Val Demings joined House Judiciary Committee Ranking Member Jerry Nadler and Congressional Black Caucus Chairman Cedric Richmond to introduce a resolution to censure President Donald Trump, based on his statement that the United States should reduce the number of immigrants arriving from “shithole” countries, including Haiti and countries in Africa.

“I am proud to represent every person in my district, including tens of thousands of Americans of Haitian and African ancestry. Unfortunately, racism is still the ghost in the room, and now it is the ghost in the White House,” said Representative Demings. “Those who manipulate and stoke the sin of prejudice for their own ends do not deserve our hatred, for as Dr. Martin Luther King, Jr. said, ‘let no man pull you low enough to hate him.’ But they do deserve our condemnation and our censure. We cannot allow racism and prejudice to form the basis for federal policy. We cannot become a country that indulges in our original sin rather than seeks to abolish it.”

“The Administration’s defense, that this is about ‘economics,’ is no defense at all. African immigrants in the United States are among the most-educated people in the world. Some of those immigrants may invent the next transistor or the new penicillin. But whether or not you deserve to join a free society shouldn’t depend on your potential economic output, and it certainly shouldn’t depend on your race.

“We must be better than that. I condemn the president’s statements and I unreservedly support a resolution of congressional censure,” Rep. Demings concluded.

A congressional censure is a process of official Congressional reprimand — in this case, the political repudiation of a President or a President’s actions.