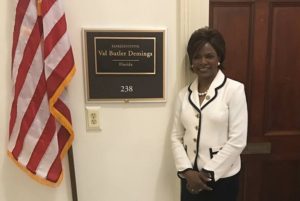 Representative Val Demings introduced an amendment to the House Committee on Oversight and Government Reform Tuesday that would give the committee control of construction of the proposed wall on the U.S.-Mexico Border. Congresswoman Demings represents Florida’s 10th Congressional district.

“Serious questions have been raised by both Republicans and Democrats about the effectiveness of the wall in deterring or disrupting illegal border crossings,” said Rep. Demings.

The amendment would give the committee control to examine costs associated with construction, maintenance, increased surveillance, environmental effects, and compensation for affected property owners as well as look at the effectiveness and source of funding for the wall.

“The truth of the matter is that no one can tell us exactly how much it will cost taxpayers because we haven’t seen reliable cost estimates, which is why it is imperative that it be included in our Oversight Plan,” she added.

The amendment would also have given the committee control to examine the contracting and subcontracting process, total cost estimates and expenditures for the project, and the sources of any funding used or reprogrammed for these purposes to ensure that they comply with all applicable laws and regulations.

“The Order and the President’s recent proclamations have sent our foreign relations with Mexico, one of our largest trading partners, into a tailspin,” said Rep. Demings. “Demanding that Mexico pay for a wall—when it appears ever more likely that the American taxpayer or consumer will pay—appears to be counterproductive and may spark a trade war that will only hurt American businesses and consumers.”

Rep. Demings sits on the House Committee of Government Reform and is a ranking member on the Subcommittee on Intergovernmental Affairs.

Is Orlando a Good City for Cat Lovers?