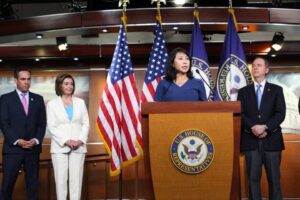 After a bipartisan approach failed, House Speaker Nancy Pelosi appointed members to a select House committee that will investigate the January 6th Capitol riot – and Representative Stephanie Murphy is on the list.

“As a Member of the 1/6 Select Committee, I’ll follow the facts wherever, and to whomever, they lead—through a strictly non-partisan lens,” Rep. Murphy said. “When I was a baby, my family fled an authoritarian country. We were rescued by the U.S. Navy and given refuge in America. I love this country beyond words. To see the citadel of American democracy assaulted is a reminder that our democracy is not self-sustaining. It needs to be preserved and protected by American patriots of every political stripe.”


Pelosi announced eight members of the committee, with Liz Cheney being the only Republican:

“It is imperative that we find the truth of that day and ensure that such an assault on our Capitol and Democracy cannot ever again happen,” Pelosi said in a statement.

Rep. Val Demings, who was one of the House managers for the Trump impeachment and who is currently running for U.S. Senate, took aim at former President Donald Trump as she voiced support for the committee.

“January 6th was an attack on our Constitution and our republic,” Rep. Demings said. “140 Capitol Police officers were beaten and bloodied by the insurrectionists. Our effort to create an independent, bipartisan commission to investigate this crime against the Constitution was blocked by Republicans in Congress who have promoted the Big Lie that ex-president Trump somehow ‘won’ the election—which he did not—because they can’t accept the actual truth that President Biden was elected freely and fairly by the American people. But our search for the truth was only delayed, not denied.”