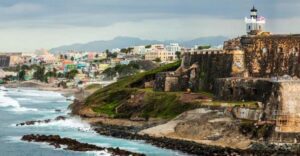 
“The health and safety of the American people is my number one priority,” said Rep. Demings. “It is critical that we hear directly from Puerto Rican communities and first responders on the ground so that we can evaluate Puerto Rico’s needs and FEMA’s response. We know that this storm is yet another blow on top of the ongoing recovery from Hurricane Maria – a recovery that has taken far too long.”

Rep. Demings was invited to Puerto Rico in her role as Subcommittee Chair by Puerto Rico Governor Pedro Pierluisi.

“I am writing to invite you to see first-hand the devastating impact of the Hurricane,” wrote Governor Pierluisi. “As a member of Congress and Chairwoman of the Subcommittee on Emergency Preparedness, Response, & Recovery of the House Committee on Homeland Security, and a strong advocate for the recovery of the 3.2. million American citizens that call Puerto Rico home, you will have an opportunity to hear from constituents in the most impacted communities, from federal agencies deployed on the island, and from members of my administration to better understand how Congress can be most effective in helping rebuild a stronger and more resilient Puerto Rico.”

Rep. Demings called for a Major Disaster Declaration after Hurricane Fiona to unlock additional federal aid to Puerto Rico and speed the response. She also wrote to FEMA Administrator Deanne Criswell calling on FEMA to initiate 100% cost-share to reduce burden on Puerto Rico.

“We cannot repeat the mistakes of the past,” Rep. Demings added. “The people of Puerto Rico deserve the best that we can deliver, and I will be expecting to see an extremely high level of professionalism, attention, urgency, and effective action from FEMA and other partners on the ground. We must make families and communities whole. Five years since Hurricane Maria, I am committed to make sure that Puerto Rico has everything they need to rebuild.”

Central Florida Congressman Darren Soto and Democrat Charlie Crist will also be visiting Puerto Rico. “Thank you President Joe Biden for answering our bipartisan call and issuing a Major Disaster Declaration for Puerto Rico,” said Rep. Soto. “This will ensure that FEMA Federal Emergency Management Agency and other relevant agencies can provide relief and save lives on the island in the wake of Hurricane Fiona.”