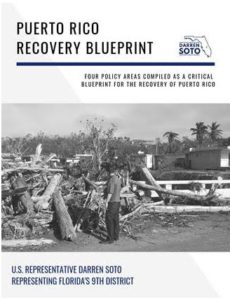 Rep. Darren Soto released his Congressional Puerto Rico Recovery Blueprint, a report outlining the policy areas and plan of action Congress must take for the recovery of Puerto Rico.  Rep. Soto prepared the Blueprint at the request of Members of Congress. It was presented to congressional leaders in the U.S. House of Representatives, following extensive meetings with the Puerto Rican community in Central Florida, as well as with multiple Puerto Rican government officials and visits to the island.

“In the aftermath of Hurricane Maria, we witnessed the longest blackout in U.S. history and a devastation that took nearly 300,000 American lives,” Rep. Soto said. “It’s time that President Trump act and show his commitment to a real plan for recovery. I’ve authored a report with four critical policy areas to focus on immediately for the recovery of Puerto Rico.”


“While this is a basic plan of action to educate both the public and other members of Congress, we are also ramping up action by leading a Congressional delegation to Puerto Rico from March 15th –18th,” Rep. Soto added. “Members of the Natural Resources Committee will be coming down to the island to have tours, inspections, and review the current state of Puerto Rico. This fact-finding mission will kick-start the process of hosting critical oversight hearings on the failed disaster relief. Americans including those in Puerto Rico deserve answers and to ensure this never happens again.”

Rep. Soto serves on the Natural Resources Committee, which has jurisdiction over Puerto Rico, and is also the co-chair of the Congressional Hispanic Caucus’ Puerto Rico, Insular Areas Task Force. The four policy areas of focus in the blueprint include: 1) Disaster Relief, 2) Economic Development, 3) PROMESA/Debt Reform, and 4) Medicaid Reform.