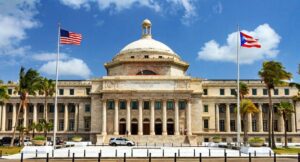 
In January, the judge in charge of Puerto Rico’s bankruptcy process, Laura Taylor Swain, approved a debt restructuring for the island.

“While we wished to see deeper debt cuts… Puerto Rico has now the opportunity for a path forward, and to forge a comprehensive strategy for recovery and economic development,” the leaders said in a statement.

The agreement cuts Puerto Rico’s $72 billion debt by about 55%, but debt payments will only be sustainable, the religious leaders argue, if growth and economic recovery projections are accurate. The territory’s four-year bankruptcy process took place under federal legislation Jubilee USA and Puerto Rico religious leaders promoted in 2016, after the island defaulted on debt payments.

The leaders laid out a seven-point agenda for Congress, the White House and the island’s government to expand manufacturing jobs and infrastructure and moving nutrition, Medicare, tax relief and other programs to the same status with US States. The leaders also urged greater government accountability and an audit of the island’s debt.

“We should make sure that the debt payments do not come at the expense of the hunger of our people, including our children, 60% of whom live in stark poverty,” said Archbishop Roberto Gonzalez who heads the Roman Catholic Archdiocese of San Juan and a signer of the statement.

The heads of US and Puerto Rico churches signed the letter representing Catholic, Methodist, Lutheran, United Church of Christ, Christian (Disciples), Presbyterian, Baptist and Evangelical churches. The 26 signers include leaders of the National and Puerto Rico Council of Churches, the US Conference of Catholic Bishops, Catholic Charities, the Caribbean Institute of Ecumenical Action and Formation, the Puerto Rico Bible Society and Jubilee USA Network.

“People across Puerto Rico continue to suffer because of the debt crisis and disasters that hit the island in recent years,” explained Eric LeCompte the Executive Director of Jubilee USA Network, the organization that coordinated the statement with Puerto Rico religious leaders. “For Puerto Rico’s debt to be sustainable and to reduce the high child poverty rates, new disaster relief and recovery monies are critical.”