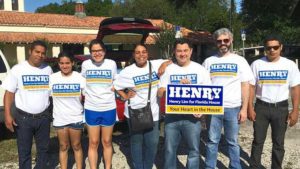 Henry Lim filed to run for State House in District 47 to make a difference on important issues like public education, Medicaid expansion, and jobs.  The bilingual Orlando attorney brings a broad set of leadership and experience to the table, currently serving as the Chair of the City of Orlando Citizens’ Police Review Board where he exercises oversight of the Orlando Police Department’s Internal Affairs department.  He also serves as the President of the Hispanic Bar Association of Central Florida.  Lim & Associates, his law firm, was twice nominated as Small Business of the Year by the Metropolitan Business Association (MBA), the LGBT Chamber of Commerce.

Lim has three children, all of whom currently attend Audubon Park Elementary, and is happily married to Joelle Lim, a Varying Exceptionalities Teacher and union member at Lake Como Elementary in Orlando. He wants to rework state laws applying to small businesses, making them more likely to get tax incentives, loans, and allow other opportunities, especially for those businesses employing 25 or less employees.  Lim believes that Florida must “bring teachers to the table,” in every decision made about schools.  He also promotes the importance of “ending the testing focus,” and “decreasing tax dollars going to charter and non-public schools.”  Lim supports the notion that charter schools should be held to the same accountability and transparency standards as public schools.  “Funding for public education is critical,” he said in a recent interview with the West Orlando News.

The Prius-driving Lim is quick to inform others about the importance of having clean air, water, and usable land in Florida.  He pledges to use one of his six legislative bill slots to sponsor a bill banning fracking statewide and promotes, “sound environmental policies,” in the state.  Lim uses his own children as a frame of reference when talking about the importance of protecting and conserving natural resources, saying that he tries to teach the importance of conservation to his first, third, and fifth graders.

Lim has strong alliances within the LGBT and labor communities of Greater Orlando, evidenced by his work with the MBA and his recent, “endorsement recommendation,” by the Central Florida Labor Council of the Florida AFL-CIO, as stated in a recent election newsletter mailed to members of the Orange County Classroom Teachers Association.  Although the “endorsement recommendations are not final until they are voted upon at the AFL-CIO Committee on Political Education meeting in June,” Lim’s campaign got this relatively early nod from organized labor, edging out fellow Democratic political opponents Clint Curtis and Elizabeth Tuura for the recommendation and likely endorsement.  Lim is critical of incumbent Mike Miller for his statements that indicated support for expanding Medicaid in Florida, yet refusing to support its expansion once Miller was elected.

Lim has raised about $36,971 as of April 30, 2016, the date of the most recent campaign finance filings for state offices.  His opponent Elizabeth Tuura has raised slightly more, bringing in $42,934 but she has also reported an additional $7,230 for in-kind contributions for campaign services and benefits to her campaign.  Lim plans to combat Republican incumbent Mike Miller’s approximate $125,000 war chest by loaning his campaign money and by networking with donors across the state.  Lim has scheduled a series of summer fundraisers to help provide the funds needed to communicate with the voters in District 47 which includes much of Central Orange County, from Winter Park to Belle Isle, stretching as far west as sections of I-4 and 17-92.