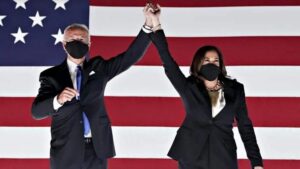 After a historic election and a COVID-plagued campaign that will not be forgotten, the race is being called for President-elect Joe Biden. Biden’s win, which generated historic voter turnout, is also ground-breaking – or more accurately breaking the glass ceiling – because of incoming Vice President Kamala Harris.

“We did it. We did it, Joe. You’re gonna be the next President of the United States,” Harris said with a laugh on a phone call to the former Vice President, with the moment now memorialized on video all over social media.


Of course, President Donald Trump and the Republican Party are still contesting several states, and the process should be exhausted fully. That will be a necessary part of Biden’s efforts to heal the nation after one of the most divisive political campaigns in recent history. But Democrats nationally are celebrating, breathing easier and looking forward to January 2021.

Biden will be speaking at 8 p.m. ET Saturday in his first address as President-elect in what will be his victory speech. Harris will also be in attendance.