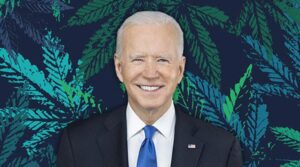 President Joe Biden campaigned saying that no one should be in jail just for marijuana possession or using the drug and now he has laid out three parts of his marijuana reform.

First, President Biden announced a pardon of all prior federal offenses of simple possession of marijuana. The President said there are thousands of people with prior federal marijuana possession convictions who may be denied employment, housing, or educational opportunities as a result.

“I have directed the Attorney General to develop an administrative process for the issuance of certificates of pardon to eligible individuals,” President Biden said in a statement. “My action will help relieve the collateral consequences arising from these convictions.”

In Florida, that could happen if Charlie Crist is elected over incumbent Governor Ron DeSantis. “President Biden’s pardon of federal marijuana convictions is a monumental step forward for our criminal justice system as we work to make our country more just and equitable for all,” said Crist. “As governor, I will push for the full legalization of marijuana and the expungement of all existing charges and sentences for nonviolent offenses. It’s time to right the policies that have failed our fellow Floridians, too many of whom are our Black and brown neighbors.”

“I join others such as Charlie Crist in lauding this decision to rectify what  President Biden rightly called a failed ‘federal policy,’ which has tended to be enforced disproportionately against minority communities,” added Karen Green, Democratic candidate in Central Florida’s 7th congressional district. “While this change in federal policy doesn’t directly affect individuals convicted under state law, I encourage Florida Governor Ron DeSantis to take similarly merciful action toward individuals convicted of simple marijuana possession under Florida state law.”

Federal law currently classifies marijuana in Schedule I of the Controlled Substances Act, the classification meant for the most dangerous substances. This is the same schedule as for heroin and LSD, and even higher than the classification of fentanyl and methamphetamine – the drugs that are driving our overdose epidemic. That may be changing.

“Third, I am asking the Secretary of Health and Human Services and the Attorney General to initiate the administrative process to review expeditiously how marijuana is scheduled under federal law,” President Biden said.


The Democratic President also warned that even though federal and state regulation of marijuana is changing, important limitations on trafficking, marketing, and under-age sales should stay in place.

“Too many lives have been upended because of our failed approach to marijuana,” President Biden said. “It’s time that we right these wrongs.”