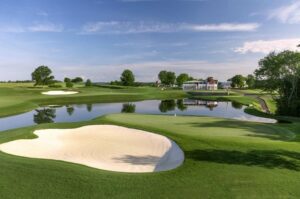 The PGA of America and The Trump Organization announced that they have reached a settlement resolving their ongoing dispute regarding the PGA’s decision to cancel its contract with Trump National Golf Club in Bedminster, New Jersey to host the 2022 PGA Championship.

Former President Donald Trump called it “a wonderful conclusion for all.”


While the terms of the settlement will remain confidential, representatives from both the PGA and the Trump Organization expressed satisfaction with the agreement.

“The Trump Organization’s contribution to the golf community is appreciated,” The PGA of America stated. “We are thankful the company employs hundreds of dedicated PGA Professionals and consistently gives back to the golf community through hosting charitable events and sponsoring junior golf programs. As stated in 2014 when announced, Trump Bedminster is a major championship-worthy golf course and in a portfolio along with some of the finest private and public golf courses anywhere in the world.”

Eric Trump, Executive Vice President of the Trump Organization, echoed that sentiment. “We have great respect for the work of the PGA,” Eric Trump said. “Over the past 20+ years, we have enjoyed working with the PGA to deliver to our club members and the public some of the greatest golf experiences anywhere in the world.  We look forward to continuing to support the mission of the PGA and its Professionals, who are the best in the golf industry.”

Trump Coming to Orlando with O’Reilly