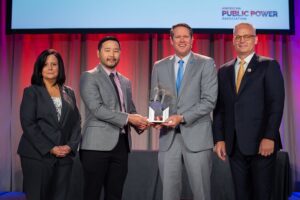 OUC—The Reliable One was honored with the Energy Innovator Award at the American Public Power Association’s National Conference in Orlando last week. The APPA award recognizes utilities that either develop or apply creative, energy-efficient techniques and technologies that provide better service to electric customers or launch projects that increase the efficiency of utility operations.


OUC won the award for its innovation of a “nanogrid,” a test site of emerging energy assets that could prove to be integral to the utility’s goal of reaching net zero carbon emissions by 2050, with interim goals of 50% CO2 reductions by 2030 and 75% by 2040. Led by OUC’s Emerging Technologies team, the project seeks to offer replicable and deployable solutions for decarbonization and decentralization of the grid, backup power systems and growing electric vehicle use.

The nanogrid consists of a floating photovoltaic solar array, battery storage, vehicle-to-grid and conventional EV charging stations, and a hydrogen system. The hydrogen setup includes an electrolyzer, storage tanks and two fuel cells. OUC is part of a research team involved in a U.S. Department of Energy-supported $9 million project that’s studying the production, storage and transport of hydrogen for the dispatching of electricity or as transportation fuel. OUC is one of only a few utilities in the United States exploring hydrogen’s potential as a solution to the challenges of decarbonizing the grid.

“We are honored to be recognized as an energy innovator by the American Public Power Association,” said Bullock. “The nanogrid is a cutting-edge project, leading the way for OUC and our industry to adopt innovative clean energy technologies and integrate them into the electric power grid. I am very proud of the work our team has done on this project.”

OUC Customers Can Return to Normal Water Use

Three Things to Keep Top of Mind for Healthy Finances