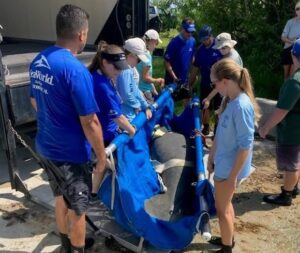 A manatee in distress due to nutritional deficiency was rescued from the intake canal of OUC’s Indian River power plant in late September 2021, marking the second time in five years the same sea cow has been given a new lease on life.

On Sept. 23, the Manatee Rescue and Rehabilitation Partnership launched a boat from the dock at the OUC canal and corralled “Matthew” the manatee in a net, then loaded him onto a truck bound for SeaWorld Orlando. Access to the canal from U.S Highway 1 in Titusville is restricted, but OUC has provided the rescue team with gate badges so it can enter the property to check on manatees and use the dock. As a safety precaution, OUC stations a mobile security officer at the canal anytime rescue team members enter the water, as they did to get Matthew.

“He had lost a significant amount of weight. We could see his ribs,” said Amanda Mathieu, research assistant with the Clearwater Marine Aquarium Research Institute, who along with Manatee Rescue and Rehabilitation Partnership members from the Florida Wildlife Commission and SeaWorld Orlando helped retrieve the starving manatee.


Mathieu said that seagrass depletion in parts of the river was the likely cause of Matthew’s deteriorating condition. Seagrass is the primary source of a manatee’s diet while in the Indian River, but pesticide runoff and light-blocking algae blooms are threatening the aquatic plant’s sustainability. Florida’s manatee population has rebounded since being listed as an endangered species, but even as a threatened species its survival remains precarious. 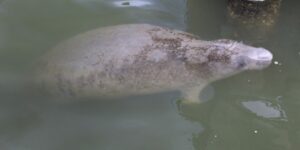 After spending time regaining his health and normal girth at SeaWorld, Matthew will be returned to his natural environment, but not likely to the Indian River, said Mathieu. “We try to put them back in the same area of the rescue, but because of seagrass depletion we can’t follow that protocol,” she added. “Right now we are releasing to Blue Springs State Park [in Orange City, Volusia County], where freshwater and vegetation are plentiful.”

Matthew was first rescued in 2016 as an orphaned calf. When the partnership team pulled him from the Indian River in Volusia County the poor guy was 49 inches long and weighed only 55 pounds, considered too small to make it on his own.

SeaWorld and the Cincinnati Zoo & Botanical Garden cared for him until he was released with a tracking device on March 2, 2020, at Cape Canaveral Energy Center, two miles south of OUC’s Indian River plant. He entered the river at 100 inches in length and a hefty 825 pounds.

Mathieu said Michael Stephens, Manager of OUC Security, “has been really helpful and accommodating” with manatee rescues at the Indian River plant’s two canals over the years. The protected canals act as a calm-water refuge for manatees.

“Protecting wildlife on our properties is very important,” said Stephens. “OUC goes to great lengths to ensure the safety of eagles, so they don’t come into contact with our powerlines, and Stanton Energy Center provides a sanctuary for the endangered red-cockaded woodpecker and other species. We were happy to help make Matthew’s rescue a success.”