On Thursday, January 12, 2023, deputies from the Polk County Sheriff’s Office continued their “Operation Pop-Top” campaign, in which they visit multiple retailers to ensure that alcoholic beverages were not being sold to anyone under 21 years of age, in accordance with Florida law. 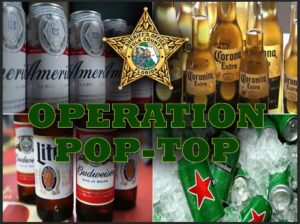 The deputies made stops at nine stores, but a clerk at one of the stores was not in compliance. All of the stores checked were in Bartow in Central Florida.

“We do these checks often,” said Sheriff Grady Judd. “Deputies are assisted by PCSO Explorers who go into the stores and attempt to buy an alcoholic drink. The store employees need to be responsible by checking ID’s and refusing to sell alcohol to those under 21.”

The Explorers program consists of high schoolers who are interested in a career in law enforcement. During this initiative, the Explorer who assisted deputies was only 16 years old.

Deputies arrested Pri Patel, 28, at the local Sunoco gas station located at 1410 US Hwy 17 South, for Selling Alcohol to a Person Under 21 (a misdemeanor) during Operation Pop-Top.