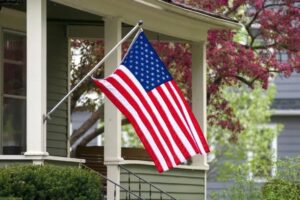 One People Flags, Inc. is a new non-profit charitable organization that  provides free American flag sets for display on homes across the country in order to unite our communities under a banner that belongs to all of us. One People’s goal is to bring America together, one flag at a time. Through a  combination of partnerships and the generosity of donors, the Stars & Stripes will proudly fly on the fronts of many more American homes as One People works to execute its mission.


After officially receiving its 501(c)(3) nonprofit designation from the IRS, One People set to work raising money to start providing free flags. One People partners with home-building organizations and veterans organizations to provide free flag sets for display on the fronts of homes built for underprivileged families as well as those who served our country. Plus, 10% of donations to One People go to Atlanta Children’s Shelter to provide  assistance to those not fortunate enough to have a home of their own.

J. Hillyer Jennings, the founder and Executive Director of One People, came up with the concept for One People when he and his wife bought their first home in Atlanta in the summer of 2020. As he installed Old Glory on the front of his home, he thought that anyone in this country who wants an American flag on the front of their home should be able to have one, especially if they served in the military for our beloved country or if they cannot readily afford it.

A large part of the inspiration for starting the organization was from Mr. Jennings’ late grandfather Col. Edwin F.  Rumsey. Col. Rumsey graduated from West Point in 1955 and served for 26 years as an Air Force pilot, including in Vietnam. Col. Rumsey’s life gave Mr. Jennings a tremendous sense of pride in our country and the utmost gratitude for those who defend it. In addition to running One People, Mr. Jennings is also a practicing attorney at King & Spalding LLP in Atlanta, where he specializes in mergers & acquisitions.

One People’s Board is made up of the following individuals, with a range of backgrounds in law, nonprofits and business: J. Hillyer Jennings, Drew Murray, Angela Kang, John Mansour, and Ryan Kopec. The team looks forward to working together to help reunite our country.

One People already has partnerships lined up and will hit the ground running. “We know that there will be plenty of demand for flags. The task in front of us is to try to raise enough money to meet that demand,” Mr. Jennings said. If you are interested in learning more and potentially donating, please visit One People Flags.