The state security apparatus which came into being during the Bush administration is now supported just as strongly, if not more so, under president Barack Obama. There has been no let up, no change in course for a system which becomes stronger with each passing day and which faces almost no political opposition. 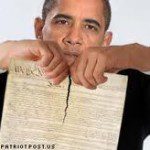 The case in question is a remnant of the worst abuses brought about by the Bush administration, involving the kidnapping and rendition of Muslim cleric Abu Omar in Milan, Italy in 2003. A former CIA operative with State Department cover is now suing the federal government because it did not protect her right to diplomatic immunity. That operative was found guilty in absentia in an Italian court and faces arrest should she ever travel to Europe again. Now the Obama administration is once again protecting the Bush abuses which its supporters thought would now be long gone.

Not content to defend Bush era abuses, and send whistle blowers to jail, Obama and Congress have extended the Patriot Act, without changes, yet again. Two Democratic members of the intelligence committee, Ron Wyden and Mark Udall, were not only among those who voted no, but they also exposed how the act is being interpreted in a new and dangerous way by the administration. The Obama justice department has decided to interpret the act in a way which it will not reveal to the public. In other words, the government has a secret way of determining what is and isn’t legal but will not share that secret with congress or with the people. Orwell and Kafka would find new sources of inspiration with this president.