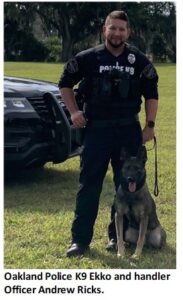 Hailing from Hungary, K9 Ekko is a nearly three-year-old Belgian Malinois/German shepherd mix. He was part of a group of five dogs tested and chosen for Oakland as he displayed the most desirable traits. Ekko is a dual-purpose K9 certified for apprehension and narcotics, having undergone approximately 740 hours of training alongside his partner and handler, Officer Andrew Ricks.

The pair have been working together for nearly a year and have become a great asset to the Oakland Police Department, the Town of Oakland and neighboring jurisdictions.


Ekko has been called out in Oakland and surrounding agencies over 30 times this year and has assisted in two felony apprehensions and 10 felony narcotics arrests.

For over 10 years, the Aftermath K9 Grant has given back to police departments, sheriff’s offices, and first responder units across the country by awarding grants that are used to offset the costs associated with creating, running, and maintaining a K9 unit. Since the beginning of the K9 Grant, Aftermath has awarded almost $250,000 in grants to K9 units nationwide.

Voting for your favorite K9 in the Aftermath Grant begins October 24th by visiting the K9 grant page, finding K9 Ekko and clicking to vote. Winners will be announced on November 3rd. Voters may also visit on Facebook and Instagram, and follow and comment on the daily with the agency name, city, and state.

Aftermath Services is the premier provider of trauma cleaning and biohazard remediation. Since 1996, they have provided professional and compassionate services to families, communities, and businesses after traumatic events.