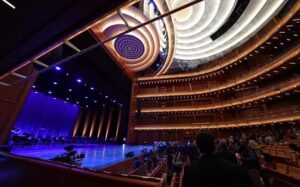 The Dr. Phillips Center for the Performing Arts has opened its highly anticipated Steinmetz Hall – a modern, architectural marvel distinguished by its incredible acoustics and unique ability to transform in shape, size and seating to accommodate a variety of performing arts and events, from operas to symphonies to modern rock.

Among the most innovative and technologically advanced concert halls in the world, Steinmetz Hall was designed to shepherd in a new era in the performing arts, by drawing internationally and nationally renowned artists to establish residencies in Orlando and supporting regional and local artists with community-centered, inspiring programming that makes the arts accessible to everyone – from area residents to the millions of tourists who visit the region annually. It is the first performing arts center to debut a world-class theater since the coronavirus pandemic began in 2020.

“This has been one of the most ambitious performing arts development projects of the 21st century,” said Kathy Ramsberger, president and CEO of the Dr. Phillips Center. “Our approach all along was to redefine the role, and the perception, of a modern performing arts center. So we placed it in the heart of Orlando, surrounded by the true culture of our city—where Arts For Every Life would always have a home.”

“We set out to build one of the greatest performing arts centers in the world—one that could transform our region and serve as a model for the future, and I think we did exactly that,” said Jim Pugh, Chairman of the Board and Founding Donor at the Dr. Phillips Center. 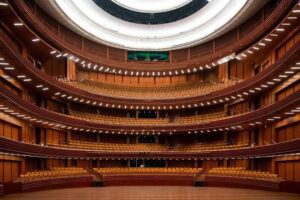 Perfect Sound Quality
To achieve its perfect, N1 background sound rating, Steinmetz Hall is encased inside an exterior concrete frame and built on top of a floating concrete foundation. More than 400 isolation rubber pads placed between the theater and its foundation create an acoustic air gap that absorbs and deadens sound from traffic and other ambient noise. A mobile acoustical reflector in the ceiling also aids in sound movement. All surfaces, including cork floors, cherry millwork and automated acoustic fabric curtains, were designed to promote sound movement from performances and mitigate noise from the audience.


Multiform Theater
Steinmetz Hall can transform into a symphony concert hall, proscenium theater or an intimate recital hall by moving a 60-foot-tall acoustical shell that weighs one million pounds upstage to downstage (front to back) along heavy-duty, steel train tracks. Adding to the theater’s flexibility, two 53-foot-high stage towers on either side of the shell rest on air casters and can transform into a hovercraft and move into different positions. Transformations are fully automated and are completed within 10 minutes.

Extensive Seating
Four main levels of seating can accommodate more than 1,700 guests. The first five rows closest to the stage have three distinct height options, making it easy to create an orchestra pit or add a forestage. Both orchestra and upper-level seats, which are natural-stained cherry wood with tamarind-colored faux leather, are close to the stage and arranged on moderate inclines to provide an even more intimate viewing experience. When not in use, 22 rows of seats in the lower orchestra pivot forward 180 degrees and can be stored upside down under the theater, creating a flat floor for dancing and catered events.

Lobby
In keeping with the center’s vision of Arts For Every Life®, all guests will continue to enter the arts center together through one main entrance and then traverse to their desired destination on the appropriate floor. Steinmetz Hall‘s lobby will feature a wave wall painting the entire lobby in color, accented by the lobby’s warm copper handrails and theater doors.

Judson’s
Slated to open in May, Judson’s – named after named after board members and founding donors, Joyce and the late Judson Green — will be a dynamic, cabaret-style space where guests can enjoy intimate performances and events and features a 27-foot wall of floor to ceiling windows. Construction on the space, formerly known as the Green Room, began in late-September 2021 and will be located near a 2,700 square foot commercial kitchen.

Steinmetz Hall will host a series of unique performances over a period of two weeks. Following the opening celebration, the hall will become the new home for the Orlando Philharmonic, Orlando Ballet and Opera Orlando, in addition to welcoming performers from all over the world.