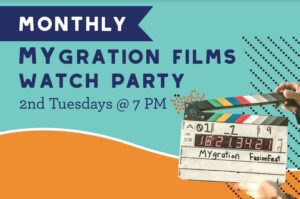 While the third annual FusionFest wrapped more than three months ago and its next edition won’t be hitting downtown Orlando until Thanksgiving weekend 2021, the organizers of the heritage-minded festival are maintaining a year-round schedule of virtual events to keep its spirit of cultural discovery as close as your desktop.

At 7 p.m. on the second Tuesday of every month, FusionFest takes to Facebook Live to present another MyGration Films Watch Party, spotlighting highlights from the three-year-old festival’s Film component. Curator Lori Turchin shows one or two shorts that profile Central Florida luminaries of diverse backgrounds, followed by conversation with the subjects, filmmakers and other special guests.


This month’s edition, streaming March 9th, features “Peace Through Dance,” documentarian Carlos Rocha’s portrait of Irish-born dancer/choreographer Sarah Costello, which was an award-winner at the 2019 festival. Rocha and Costello will both be on hand for this tandem tribute to St. Patrick’s Day and Women’s History Month. (Costello’s troupe, Central Florida Irish Dance, won the grand prize in the Entertainment category of 2018’s debut FusionFest and took third place in the Dance category of the 2020 festival.)

For the full schedule of this year’s watch parties, visit: FusionFest.org/watch

In addition, at 1:30 p.m. every Tuesday, Facebook Live plays host to Diverse Orange, a 10-minute program in which FusionFest founder Terry Olson interviews another representative of the Central Florida cultural community. On March 16th, Diverse Orange gets a splash of green, with Irish-American pastor Ryan Adams in the guest’s seat.

FusionFest, formerly a project of the Downtown Arts District, is now a nonprofit organization operating with support from Orange County Government, the Orlando Downtown Development Board and the Dr. Phillips Center for the Performing Arts. In its inaugural 2018 edition, the event received the Award of Excellence in the Downtown Orlando Partnership’s Golden Brick Awards, and took first place in the “Community Outreach Program” category of the Florida Festivals and Events Association’s SUNsational Awards.

The 2020 festival received over 300 applications from local artists, vendors and volunteers. Total turnout was approximately 5,000 over the course of two days, despite a COVID-conscious attendance limit that kept the crowd to a maximum of 1,500 people at a time. FusionFest is scheduled to return November 27 and 28, 2021.

Grayson Has Guts to Explore Senate Campaign Against Rubio