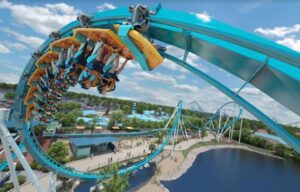 The new attractions will bring new experiences for families and thrill enthusiasts alike. Annual Pass Members will be among the first to ride with exclusive ride times.


“2023 promises to be another exciting year for our SeaWorld parks as we introduce more new rides and experiences that cannot be found elsewhere,” said Marc Swanson, CEO of SeaWorld Parks & Entertainment. “We strive to continually bring new thrills to our parks while also providing unique and engaging experiences with marine life that guests may not otherwise ever have a chance to have, all while knowing they are supporting an organization that has helped more than 40,000 animals in need over the last 55 years.”

Pipeline: The Surf Coaster Will be the World’s First Surf Coaster
“Pipeline: The Surf Coaster” is SeaWorld Orlando‘s newest attraction where the unique surfboard ride vehicle will give riders an immersive experience when their seats rise and fall to mimic the sensation of riding on a wave. Riders will encounter the rush of hanging loose on a massive wave while in a standing position as the coaster sends them through several gnarly twists and turns with five airtime movements and an innovative ‘wave curl’ inversion and maximum speed of 60 MPH. With a projected 54″ rider height, this first-of-its-kind coaster is ideal for thrill enthusiasts everywhere.

Artic Rescue in San Diego Will Be the Longest and Fastest Straddle Coaster on the West Coast
SeaWorld San Diego‘s newest family friendly coaster, “Arctic Rescue”, will launch guests at up to 40 mph on a chilly adventure as they race through the unpredictable arctic climate to help animals in danger. SeaWorld’s coolest new coaster will feature a unique indoor launch station where riders will start their journey inside of the Wild Arctic exhibit and launch outside straddling a unique snowmobile-style vehicle. Guests will race through the Arctic and experience three exhilarating launches, each faster than the last, at 34, 38 and 40 miles per hour.  The straddle snowmobile-style seats allow for an immersive ride experience for each rider as they lean into banks and turns and glide up heights as tall as 30 feet along the 2,800 feet of track.

The ride is inspired by the heroic efforts of the SeaWorld Rescue Team and their dedication to helping animals in need.  “Arctic Rescue” is integrated with the Wild Arctic exhibit which is home to a ringed seal, walruses, and belugas, some of the species most impacted by Arctic sea loss that is adversely impacting sea life. The new ride will bring awareness to the pressures the Arctic is facing and allow guests to visit, see and learn more about each animal whose species call the Arctic their home.

This family friendly and first-of-its-kind ride will catapult through the launch at speeds of 30 feet per second, allowing riders to feel the rush of a coaster while experiencing the rocking and swaying of riding on a track of water.  Once at the peak of the ride, guests will experience the world’s steepest drop in a flume attraction. Angled at a staggering 53 degrees, the chute plummets riders into a watery splashdown at over 37 miles per hour.  After winding through a series of twists and turns, “Catapult Falls” uses a state-of-the-art elevator, the only one on the continent in an attraction of this kind, to lift guests up seven feet per second to reach a height of over 55 feet. The breathtaking views don’t last long as the ride prepares guests for the ultimate plunge.