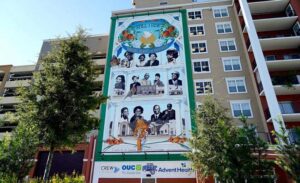 A new mural celebrating the history of Parramore, called Rising Up, will brighten the landscape of the local community that has faced gentrification under Orlando Mayor Buddy Dyer. For whatever actual Parramore residents are left, they will recognize the art exhibit honoring those who helped build the district’s history.

The mural features pillars of the community representing health care, religion, education, and music. The seven-story mural is on the CityView Apartment Building at 101 South Terry Avenue in downtown Orlando.


CREW Orlando collaborated with the City of Orlando, Orlando Neighborhood Improvement Corporation (ONIC) and local female artists of color to design and paint the mural honoring the “Unsung Heroes” who provided their services to the community of Parramore during segregation. The group said attention was paid to the history of the Wells’Built Hotel which hosted artists and musicians of color during their stay in Orlando, as well as professionals (lawyers, doctors, nurses and educators) who provided their services to the Parramore community at a time when its residents could not obtain services elsewhere.

With the help of a Mayor’s Matching Grant, CREW Orlando sponsored the Rising Up Parramore project. The Orlando Magic and Advent Health also contributed toward the project.

Does your neighborhood association, school or non-profit organization need help funding projects? Apply for a Mayor’s Matching Grant from the city.