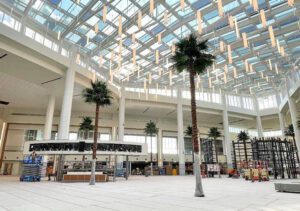 The first $1 billion in federal funding has been allocated to many projects at airports across the country, including Orlando International Airport. Through the Bipartisan Infrastructure Law, $5 billion has been granted to provide competitive grants for airport terminal development projects that address the aging infrastructure of the nation’s airports.

U.S. Representative Val Demings announced that that the Federal Aviation Administration will award $50 million to Orlando International Airport (MCO) from the Bipartisan Infrastructure Law, which she supported in Congress.

The funding coming to Orlando will be used for the Terminal C expansion. The funding will be used for four gates capable of serving either four wide body or eight narrow body aircraft. The project said it would increase capacity, provide ADA-compliant facilities, achieve LEED (Leadership in Energy and Environmental Design) certification and provide for increased competition.

“I joined Republicans and Democrats to pass the bipartisan infrastructure act because Orlando’s economy depends on our travel infrastructure,” Rep. Demings said. “I’m proud to announce this major win for our region, which will help us continue to grow as the most visited destination in America. This new funding will be used for critical expansions at the new Terminal C, which I toured earlier this year and which will help fuel our community’s continued economic growth for decades to come.”

Rep. Demings previously announced additional federal funding for $47 million per year for 5 years (over $233 million total) for Airport Improvement Projects at MCO, and called on the FAA to invest in a replacement building for the Central Florida Terminal Radar Approach Control (TRACON) facility located at MCO.

Unlike her opponent in the U.S. Senate race, Marco Rubio, Demings voted for the bipartisan Infrastructure Investment and Jobs Act, citing the need to rebuild Florida’s economy and get people back to work. “When we invest in middle class America, when we invest in people who have to go to work every day, America does better,” Rep. Demings said on the vote.

The legislation included $25 billion over the next five years to improve airports.

“The work that goes in to build safer, more accessible and sustainable terminals will provide opportunities for people across the nation. The Bipartisan Infrastructure Law is a critical investment not only in our nation’s infrastructure, but an investment in the future of our country’s workforce,” said FAA Deputy Administrator A. Bradley Mims.

The FAA put together an interactive map showing the airports receiving the grants and how the funds will be invested.