You are here: Home / Mike Greene 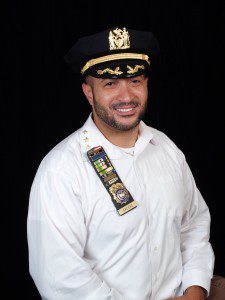 WONO: Mr. Greene, please introduce yourself? Tell us why you are running for Orange County Sheriff?

Mike Greene: Sure. My name is Mike Greene. I am running for Orange County Sheriff for a few reasons. The main reason is: I served for twenty years with the New York City Police Department and bring a tremendous amount of experience to the job. I also still have a passion and desire to help people; it’s something I would say I was born with. I can go back to when I was sixteen years old, in high school, where I first rescued somebody. The woman fell on a subway track and I found myself down there on the subway track helping her back up, lifting her and helping her back up on to the platform while a train was coming into the subway station. We both got on the platform just as the train came into the station. I remember, right then, that’s when I realized I had this desire and I liked it – helping people who can’t help themselves.

The other aspect is, I’ve been coming here for about 30 years. I have friends and family here.

Finally, just in terms of timing, it was like the perfect storm – in terms of my retirement, the election and the fact that crime is up right now. It all just came together, at the right time.

Mike Greene: Yes, I left as an NYPD Detective. My experience up in New York, I’d say, was very diverse and vast. It’s probably very hard to compare it here, in terms of the diversity and vastness. When I started, as a rookie police officer, just to give you an example, there were probably about 130,000 vehicle thefts per year and you could compare that number to here in Orange County, having 4,000 vehicle thefts per year. The numbers are just extremely vast and different. Those numbers were extremely vast and different in other crimes too, such as homicides. So, in New York, I gained a lot of extremely diverse experience at an extremely high volume.

In addition, during my career in New York City, crime was lowered by 70%. No other police department in the world has reduced crime that dramatically. I want to apply and integrate those crime fighting strategies here.

I also want to bring crime fighting strategies that I personally developed, implemented and executed, which were related to specific crimes in the Time Square area. Those strategies that I personally developed lowered crime in those targeted areas by 50% to 100%. One hundred percent meaning, completely eradicating that targeted crime which had been occurring in that area for decades. In terms of bringing those strategies and integrating them here, I absolutely know they will work. I’ve spent a great deal of time here, in high crime areas such as Pine Hills, South Apopka and Parramore. I go on ‘patrol’. I drive around these areas, making observations and I’ll observe what’s lacking in law enforcement in those areas. I’ll make observations to determine if, or what strategies I can bring to the area and if they can be integrated, and if so, how they can be integrated into the area. I’ve been doing that for many months and basically all of the strategies can be integrated here. Some of them just need a little bit of tweaking, or a few alterations, but ultimately they can all be integrated here.

WONO: You have said that on a per capita basis, it is safer in New York than in Orange County and you could lower crime dramatically and quickly, if elected. Could you explain this?

Mike Greene: Sure. The last time I checked, which was a few months ago, crime stats on a per capita basis, it is more dangerous here in Orange County than in New York City. The crime rate is higher here. If anybody wanted actual statistics, visit the FBI’s website and click on “Uniform Crime Reports.” The state of Florida has 67 counties; Orange County is number four in terms of high crime, just behind Dade, Broward and Duval counties. So, it’s fourth in terms of crime state-wide. If you go back a couple of years, Orlando was in the top four in the nation of highest crime areas, or cities in the nation. Various cities in Orange County are still ranked the highest in crime in the state and nation.

My strategies are proven. I’ve already implemented and executed them in what was the most violent and crime ridden city in the nation. My strategies dramatically reduced targeted crime by 50% to 100%. I accomplished these results within a two year time frame. I will do the same here. I will also apply the Giuliani/Bratton crime fighting strategies that resulted in a 70% decrease in crime citywide. It should also be noted that New York City consists of 5 boroughs, each borough is a county. These dramatic results occurred in not just one county, but all 5 counties collectively.

WONO: Juvenile crime persists in Orange County, though I believe it is trending downward. But, there are still a lot of guns and drugs in the hands of youth. How should that be tackled?

Mike Greene: I feel very strongly about developing programs for kids and providing alternatives so that they do not turn to crime and drugs. I would create Police Athletic Leagues (PALs) in every city. I would like to have them engaged in sports, but not just baseball, basketball and football. I’d like to expose them to sports such as archery, volleyball, gymnastics and other sports that they may only see during the Olympics. The idea behind it all is to get the kids excited about it, so that every week or so, they would look forward to competing with kids from other cities. Now, I realize not every kid likes sports. So, for those who don’t, I would also like to bring in business leaders from the community. Let’s say you have someone who is an attorney, I’d like them to come in and speak to the kids and tell them how to become an attorney and what it’s really like to be an attorney. Again, giving them something to strive for and want to achieve. I would work with various churches, businesses, civic groups, organizations and the schools system. Again, the objective is to have the youth engaged in various activities, presenting alternatives to them and positive role models and reinforcing that they too can lead productive lives as opposed to a life of crime and drugs. Community policing and having deputies actually getting out of their cars to interact with the community would also be a huge part of my crime fighting policy.

I also have a cache of crime fighting strategies that I do not want to reveal. It would be counterproductive to tell the criminals all of our plans.

WONO: You have been an NYPD cop for 20 years and now retired. Your critics have said, you haven’t lived in Orange County for any length of time and so couldn’t understand the issues. What’s your response to that?

If you look nationwide, including Orange County and other cities across Florida, it’s a generally accepted practice to hire leaders, including law enforcement chiefs, from ‘outside’. Currently, in Sanford, the chief is from Colorado. Also, the current front runner being considered to lead the Windermere Police Department is from out-of-state. Just under 100 officers in the Orange County Sheriff’s Office are former New York Police Department officers, and they have been serving here for decades. About half of all elected officials in the county are from places like New York, New Jersey and Maryland.

Going back to New York City, some of the nation’s greatest Police Commissioners that served in New York, but weren’t from New York include William Bratton from Boston (served during Giuliani administration), and Lee Brown from Houston. Former NYPD Chief Timoney served as Miami Police Chief for years. You’ll find the same situation occurring in the private sector. Corporations generally hire their CEOs from other corporations and not internally. The list of ‘outsiders’ who serve other jurisdictions is not an issue anywhere in this county, state, nation or world. So, I’d say to my critics, ‘Don’t fear someone from outside. Look at me as someone coming with a fresh set of eyes with vast experience and a different perspective, to fix a system that is broken, just as any other government or private sector agency does throughout this county, state, nation and world.’

WONO: Tell us why voters should vote for Mike Greene?

You should vote for Mike Greene because crime is up. Overall, crime is up and crimes such as murders are up 20%, from 2010 to 2011. In law enforcement, we look at end of year statistics. The last years we can compare right now are 2010 and 2011. In general, almost every crime category in Orange County has increased, either by single digits or double digits. The Florida Department of Law Enforcement website has the statistics and anyone can view them there. Search for “Uniform Crime Reports, 2011, Orange County.”

There are also several other reasons. I have experience, training and credentials that far surpass those of the current Sheriff. I have lowered crime through strategies that I personally developed in New York City, by 50% to 100%. Formerly, NYC was number one in crime, for decades. I was part of the historic 70% reduction in overall crime in the 5 counties that makeup New York City. I served as a first responder, rescuer, survivor and investigator of the 1993, 9/11/01, 2001 anthrax and 2010 terrorist attacks in NYC. I’ve solved international level cases, including the kidnapping of a child from NYC to Europe. I located the exact address of the infant and abductor within 48 hours of receiving the investigation. The current Sheriff just doesn’t have this type of experience and knowledge of advanced law enforcement, effective crime fighting and intelligence strategies, methods and techniques.

I also offer my 2 Promises:

2. I am not in this for the money. I will further reinvest in the community by giving half of my salary to local charities.

Don’t vote based on blind loyalty. Vote for your own personal safety. Do you feel safe? How many times have you or someone you know been a crime victim? As the current Sheriff has stated, Orange County is growing into a big metropolitan area, and with that growth comes more crime. ‘Folks, this is exactly why you need a big city cop to fight Orange County’s big city crime. The current Sheriff has only served here and does not have any big city crime fighting experience. I do.’

WONO: Mr. Greene, thanks for your time.

Mike Greene: Thank you, too.

• Completed thousands of hours of law enforcement and investigative related training, at the local, state and federal levels.

For reproduction permission for other than personal use, or for a PDF, please call 407.233.5630 or email us at: westorlandonews@gmail.com

West Orlando News Online does not in any way endorse or guarantee the accuracy or reliability of any of the information, statements or opinions expressed in the comments of individuals, organizations or businesses . We take due care to transcribe accurately what has been written or said by others, but because of the possibility of human or mechanical error, we cannot assume any liability for the correctness of the transcription. We point out further that, of course, all opinions expressed are those of the interviewee.