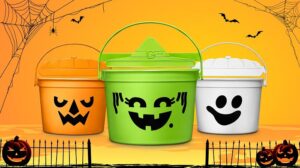 The rumors are true – McDonald’s Halloween Pails are officially coming back.

You know the ones we’re talking about – the OG McBoo, McPunk’n and McGoblin characters that first made their appearance in 1986. And now, the nostalgic Halloween Happy Meal is making its return to participating McDonald’s restaurants nationwide beginning Oct. 18th.


While it’s been six years since their last arrival to menus in October 2016, that didn’t stop many fans from coming up with a bunch of fun ways to keep their spooky spirit alive long past October over the years. And this year, many fans will not want to miss out.

Don’t feel ghosted by the limited-time appearance of McDonald’s Halloween Pails. Head to your local McDonald’s starting October 18th to snag your own, and then find creative ways you reuse yours.