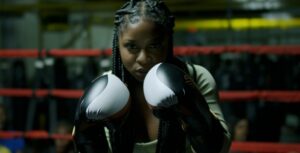 Maverick Entertainment presents “Boxed In,” a film directed by Ariel Julia Harston and starring Reginae Carter (Lil Wayne’s daughter). The movie will be available for streaming exclusively on Peacock as of November 1st, and all other streaming platforms on December 1st.

The film, produced by J. Carter and LaShon Carter, follows a young woman (Reginae Carter) whose determination to find and be her authentic self catapults her into a boxing career that her family does not approve of. The Maverick Original film also stars Clifton Powell, and Lil Zane, among up-and-comers Sean Freeman and Ernestine Johnson.


“This role will be Reginae Carter’s breakout role and will have people seeing her in a brand new light,” said J. Carter.

“On the surface, ‘Boxed In‘ seems to be about boxing and fighting for the right to express a side of you that people say is wrong,” said Director Ariel Julia Harston. “And it is about that, but at its core, it’s about family. There’s a heartwarming element to it that we hope audiences really enjoy. Because at the end of the day, you may not relate to boxing, but you can relate to how important it is to remain close to the people you love.”

The movie premiere will be held outside of Atlanta on November 3rd, attended by Reginae Carter and the rest of the cast. The official trailer can be viewed here.

Founded in 1997, Maverick Entertainment continues to be the premier distributor of niche and Urban content. Having released more than 1,000 films over the past 25 years, Maverick currently controls the world’s largest library of feature-length Black Cinema. In addition to funding and producing originals, Maverick releases 100+ movies a year and distributes physically and digitally worldwide to a growing list of platform partners.