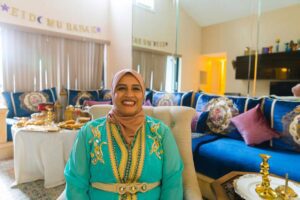 The 2021 FusionFest MYgration Film Contest premiered a compilation of 16 new short films about 16 Central Floridians on Saturday, October 2nd at the CMX Cinemas Plaza Café 12 in downtown Orlando. The audience cast votes for their favorite film at two screenings. Putting Down Roots tells the story of Ghizlane El Fazazi and how she keeps her Moroccan heritage alive as a Central Floridian. Captured, directed and edited by local filmmaker Bella Miranda, the short film won the 2021 MYgration Films Audience Choice Award. They both received a $100 gift certificate along with a trophy.


The annual MYgration Films Contest, presented by OUC, randomly pairs filmmakers with Central Floridian residents and gives them five days to complete a three-to-five-minute film about the subject. These films highlight their cultural heritage and how that heritage shapes their life here in Central Florida. A panel of film professionals will also choose a Best Film and a Best Student Film which will be awarded $1,000 and $200 respectively at the Awards Show which concludes FusionFest’s two-day festival November 28, 2021 at 5:00 p.m.

After studying Tourism and Hospitality Management at the International Superior Institute of Tourism in her native Morocco, Ghizlane El Fazazi signed up for the International Student Exchange program at EPCOT. Once here, she realized she had found her place.

“What’s not to love?” she asks. “The best parks. The best weather! The best place to raise a family! Soon I got married and set roots here. This is home and I love it!”

Bella Miranda (@circuitousblur on Instagram) is a freelance artist based in Kissimmee, Florida. Her distinct style allows others to see the world through her eyes. Bella is also passionate about traveling and creatively collaborating with others.

Winning films from the past two years can be seen at FusionFest.org/Film.