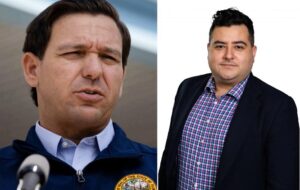 Florida Governor Ron DeSantis was ordered to respond to the allegations that his Texas-based Immigration Flights exceeded legislative authority and as a result he unlawfully exploited his position to create publicity that benefited his re-election campaign.

The decision from Judge Lee Marsh, released on October 14th and available below, means that the case, filed by Libertarian candidate Hector Roos will proceed. Roos originally filed before the Florida Supreme Court before being transferred to the Second Judicial Circuit Court in Leon County, Florida. Roos is representing himself.


The Libertarian candidate says that Republican Governor DeSantis has used state funding and even the Florida National Guard and volunteer police officers to support efforts by the state of Texas to call attention to the failed federal immigration system. Roos said it is a claim Gov. DeSantis continues to make to support his Texas-based Immigration Flights.

The lawsuit alleges that while prior assistance provided to the state of Texas was lawful, the Texas-based Immigration Flights is not. Governor DeSantis has dismissed this claim as “semantics” answering public questions about operating his Immigration Flights from Texas instead of Florida when the explicit wording of the Florida Legislature’s authorization is “to facilitate the transport of unauthorized aliens from this state.”

“While Ron DeSantis told the public he was doing ‘everything in his power’ to protect Floridians, instead we find him so focused on running for the Presidency that he has failed to confront a truly horrific cost of living crisis caused by increased property taxes, the collapse of the property insurance industry and the rising energy costs,” said Hector Roos, Libertarian Party of Florida Candidate for Governor and Executive Committee Member. “I am grateful that the court will provide us an opportunity to hold Ron DeSantis accountable, and to deliver justice for taxpayers and homeowners harmed by Ron DeSantis’ reckless behavior and incessant brinkmanship.”

Here is a copy of the judge’s recent order, provided by Libertarian Roos: