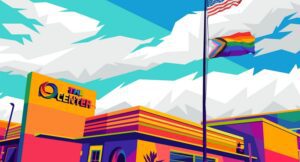 The LGBT+ Center Orlando, Inc. has been named the winner of the Elevate GET LOUD Award, a recognition given to exemplary grassroots organizations around the world. The Center was chosen last month from hundreds of public nominations. The Center will receive $10K to deepen its work promoting and empowering Orlando’s LGBT community and its allies through information, education, advocacy and support.


The Miami-based Elevate Prize Foundation recently launched The Elevate GET LOUD Award in an effort to give ordinary people a new way to champion grassroots organizations in their community. With a new issue being named every month, the inaugural award was centered around PRIDE, calling for nominations of organizations advocating for the rights of the LGBTQ+ community on the local level.

“We are honored to grant the first Elevate GET LOUD Award to The LGBT+ Center Orlando,” said The Elevate Prize Foundation’s CEO Carolina Garcia Jayaram. “With the recently passed Don’t Say Gay Bill in Florida and the Pulse Nightclub shooting in 2016, the community there has been through so much and has shown remarkable resilience and strength. The LGBT+ Center Orlando, Inc. exemplifies why grassroots organizations are so essential – tirelessly showing up for and empowering the LGBTQ+ community.”

With what they describe as anti-LGBTQ+ legislation and the rising rate of hate crimes targeting the community, the group said people are looking for ways to help, but don’t know where to start. Now with the homegrown Elevate GET LOUD Award, anyone around the world with an Instagram account can nominate local organizations each month for a chance to win the five-figure prize.

“Hate crimes are rising as anti-LGBTQ+ legislation passes, and grassroots organizations are on the front lines, advocating for and protecting the rights of LGBTQ+ people,” added Garcia Jayaram. “It’s as important as it’s ever been to lift up and support these courageous, vital organizations.”

The Award is the latest global initiative to demonstrate how social media can generate real impact offline. The award also highlights the role Gen Z and Millennials play in the conversation, which together submitted over two-thirds of the nominations.