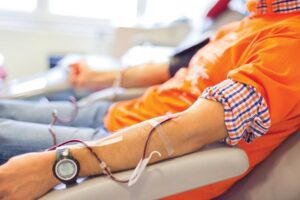 U.S. Representative Val Demings and Rep. Mike Quigley have introduced the Science in Blood Donation Act of 2020, which would end discrimination against potential blood donors based on their sexual orientation or gender identity.

“Every day, across the United States, donated blood marks the difference between life and death. There is no substitute,” said Rep. Demings. “Yet our country turns away thousands of healthy and willing blood donors based solely on their gender identity and sexual orientation. This policy is based on fear, sigma, and prejudice, not science. Expanding the donor pool by hundreds of thousands of healthy Americans would save lives every day in emergency rooms and hospitals around the country.”


“Blood is never at higher demand than in an emergency,” she continued. “Orlando knows the pain of mass shootings, and discriminatory sexual orientation guidelines denied victims’ friends and families the opportunity to donate blood afterward. It’s time to move away from these archaic rules and ideologies. When we know better, we should do better. By basing our medicine on science, we can maximize our donor pool while keeping our blood supply safe.”

This legislation would require the Food and Drug Administration (FDA) to revise its Guidance on Reducing the Risk of Human Immunodeficiency Virus Transmission (HIV) by Blood and Blood Products based on an assessment of current testing accuracy and individual risk-based analysis, rather than categorization. It would also require the FDA to revise the donor questionnaire based on an individual risk assessment of sexual behaviors upon which all donors are evaluated equally, without regard to sexual orientation or gender identity.

“I’ve been proud to lead on this issue in Congress and am equally proud to introduce this bill with my good friend Rep. Val Demings,” said Congressman Quigley. “Over the course of many years, we have made significant progress in rolling back an indefinite ban on blood donations from MSM, to a 12 month deferral to the current 3 month deferral. This is still not enough. Our work will not be complete until FDA approves a non-discriminatory, science-based policy that properly addresses individual risk assessment, as we’ve seen countries across the world adopt. An arbitrary blanket ban, especially during a crisis, is simply unacceptable”

Dr. George A. Wallace, Executive Director for The Center, explained the continuation of enforcement of prohibiting blood donations by sexually active gay and bisexual men, stigmatization is still front and center and does not reflect the best science available. “As an executive director of one of the oldest LGBT community centers in the nation and the largest HIV testing site in central Florida, I have witnessed firsthand the current discriminatory laws in action,” he said. “It is time for the laws of our nation to treat everyone equally. By updating the donor questionnaire to be based on individual risk assessment of sexual behavior upon which ALL donors are evaluated equally, without regard to sexual orientation or gender identity.”

Demings agrees. “It’s time to move away from these archaic rules and ideologies,” she concluded. “When we know better, we should do better. By basing our medicine on science, we can maximize our donor pool while keeping our blood supply safe.”